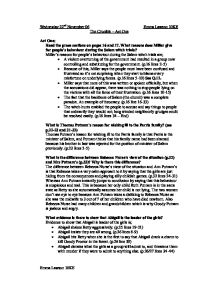 The Crucible - Act ONE

Wednesday 22nd November 06 Emma Lawson 10KE The Crucible - Act One Act One; Read the prose sections on pages 16 and 17. What reasons does Miller give for people's behaviour during the Salem witch trials? Miller's reasons for people's behaviour during the Salem witch trials are; * A violent overturning of the government had resulted in a group now controlling and substituting for the government. (p.16 lines 2-5) * Because of this, Miller says the people must have been confused and frustrated so it's not surprising when they start to blame every misfortune on underlying forces. (p.16 lines 5-10) See Q.12. * Miller says that none of this was written or spoken officially, but when the accusations did appear, there was nothing to stop people lying on the victims with all the force of their frustration. (p.16 lines 10-15) * The fact that the backbone of Salem (the church) was a complete paradox. An example of theocracy. ...read more.

The two women don't see eye to eye because Ann Putnam takes a disliking to Rebecca Nurse as she was the midwife to 3 out of 7 of her children who have died newborn. Also Rebecca Nurse had many children and grandchildren which is why Goody Putnam is jealous and angry. What evidence is there to show that Abigail is the leader of the girls? Evidence to show that Abigail is leader of the girls is; * Abigail shakes Betty aggressively. (p.25 lines 19-21) * Abigail insists they are all wrong. (p.26 lines 8-9) * Abigail hits Betty when she is the first to say that Abigail drank a charm to kill Goody Proctor in the forest. (p.26 line 30) * Abigail dictates what the girls as a group will admit to, and threatens them with murder if they were to admit to anything else. (p.26/27 lines 34-44) How does Abigail end up accusing Tituba? Abigail ends up accusing Tituba when Reverent Hale is interrogating her (p.45), when the atmosphere is very tense. ...read more.

She gives in and the two names are suggested to her and they are who she accuses. This is also an example of how the anti-communist courts worked. Comment on the ending of Act One from a dramatic point of view. The whole of Act One is set in Betty's room, this helps to build tension as there is no distraction with the location so your entire focus is on the characters. The tension is also built up from the point where Abigail and Betty are accusing other people of compacting with the devil within the village. The shouting rapidly becomes faster and the audience is really engrossed in the moment. Abigail shouts the final line which means the act ends on an exclamation mark, this is the crescendo. As soon as the last line has been said the curtain falls and this is the climax, the visual and sound aspects of the scene have both vanished so this has a surprising effect on the audience as it is a massive contrast to what they have just been watching. ?? ?? ?? ?? Emma Lawson 10KE ...read more.