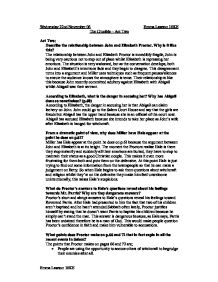 Wednesday 22nd November 06 Emma Lawson 10KE The Crucible - Act Two Act Two; Describe the relationship between John and Elizabeth Proctor. Why is it like this? The relationship between John and Elizabeth Proctor is incredibly fragile, John is being very cautious not to step out of place whilst Elizabeth is repressing her emotions. The situation is very awkward, but as the conversation develops, both John and Elizabeth's intentions fade and they begin to disagree. This disagreement turns into a argument and Miller uses techniques such as frequent pauses/silences to ensure the audience knows the atmosphere is tense. Their relationship is like this because John recently committed adultery against Elizabeth with Abigail whilst Abigail was their servant. According to Elizabeth, what is the danger in accusing her? Why has Abigail done so nonetheless? (p.60) According to Elizabeth, the danger in accusing her is that Abigail can claim lechery on John. ...read more.

So when Hale begins to ask them questions about witchcraft and religion whilst they're on the defensive they make him feel unwelcome unintentionally, this raises Hale's suspicions. What do Proctor's answers to Hale's questions reveal about his feelings towards Mr. Parris? Why are they dangerous answers? Proctor's short and abrupt answers to Hale's questions reveal his feelings toward Reverend Parris. After Hale had presented to him the fact that two of his children aren't baptised and he hasn't attended Sabbath often lately, Proctor justifies himself by stating that he doesn't want Parris to baptize his children because he simply can't stand the man. This answer is dangerous because, as Hale says, Parris has been ordained therefore he is a man of God. This would make people question Proctor's confidence in faith and make him vulnerable to accusations. What points does Proctor make on p.66 and 72 that in fact explain all the recent events in Salem? ...read more.

The accusation is that Elizabeth sent out her spirit to stab Abigail with the needle. Comment on the ending of Act Two from a dramatic point of view. The whole of Act Two is set in the Proctor's house, this helps to build tension as there is no distraction with the location so your entire focus is on the characters. The tension is also built up by the fact that the amount of characters in the room increases as the more traumatic it gets for the Proctors, this brings a certain claustrophobia into the scene. The frustration rapidly increases and the audience is really engrossed in the moment. The aggressiveness from John Proctor towards Mary Warren is really quite threatening which makes the audience uneasy, this act also ends on an exclamation mark, this is the crescendo. As soon as the last line has been said the curtain falls and this is the climax, the audience is once again left with a massive contrast to dwell on. ?? ?? ?? ?? Emma Lawson 10KE ...read more.