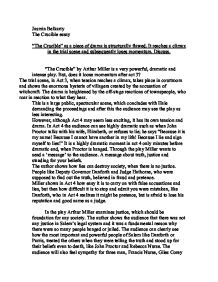 &quot;The Crucible&quot; as a piece of drama is structurally flawed. It reaches a climax in the trial scene and subsequently loses momentum. Discuss.

Jasmin Belkarty The Crucible essay "The Crucible" as a piece of drama is structurally flawed. It reaches a climax in the trial scene and subsequently loses momentum. Discuss. "The Crucible" by Arthur Miller is a very powerful, dramatic and intense play. But, does it loose momentum after act 3? The trial scene, in Act 3, when tension reaches a climax, takes place in courtroom and shows the enormous hysteria of villagers created by the accusation of witchcraft. The drama is heightened by the off-stage reactions of townspeople, who roar in reaction to what they hear. This is a large public, spectacular scene, which concludes with Hale demanding the proceedings and after this the audience may see the play as less interesting. However, although Act 4 may seem less exciting, it has its own tension and drama. In Act 4 the audience can see highly dramatic such as when John Proctor talks with his wife, Elizabeth, or refuses to lie; he says "Because it is my name! Because I cannot have another in my life! Because I lie and sign myself to lies!" It is a highly dramatic moment in act 4 only minutes before dramatic end, when Proctor is hanged. Through the play Miller wants to send a 'message' to the audience. A message about truth, justice and standing for your beliefs. The author shows how lies can destroy society, when there is no justice. People like Deputy Governor Danforth and Judge Hathorne, who were supposed to find out the truth, believed in fraud and pretence. Miller shows in Act 4 how easy it is to carry on with false accusations and lies, but then how difficult it is to stop and admit you ...read more.

Here are all your familiar sprits- your incubi and succubi; your witches that go by land, by air and by the sea." After the couple of months in Salem he believes that there in no witchcraft; "It is a lie! They are innocent!" Hale wants to save the innocent people, condemned to hang; he wants the truth to win as well. But even Hale cannot do anything on his own. Parris does not want to just, honest and fair like Hale; he does not care about the truth. In Act 4 he asks for postponement only because the villagers want it and Parris is afraid to lose his reputation. Miller sets Act 4 in Salem's jail. After the hysteria at the end of Act 3, with crowds of people and noise and light, Act 4 begins in silent darkness. The silence is broken by the sound of footsteps and the rattle of keys. The 'bundle of rags' on the floor turns out to be Sarah. This eerie prison scene is highly effective and in great contrast to the previous one. The women are actually having a laugh at the situation in Salem. They called Herrick, the marshal, "His majesty" meaning the Devil. They are pretending the Devil will take them to Barbados; "Devil, him be a pleasure man in Barbados, him be singin' and dancin' in Barbados. It is you folks- you riles him up 'round here; it be too cold 'round here for that Old Boy. He freeze his soul in Massachusetts, but in Barbados is just as sweet." Herrick takes them seriously, as he comments "I'd not refuse it, Tituba; it's a proper morning to fly into hell." ...read more.

It is important to show the audience reunion of John and Elizabeth so the drama level can calm down, tension however still remains high so it keeps play interesting for the audience. The scene of reunion between them shows that Elizabeth forgave him everything and understood her own sins. She says, "John, I counted my self so plain, so poorly made, no honest love could come to me! Suspicion kissed you when I did; I never knew how I should say my love. It were a cold house I kept!" Their whole conversation is calm, there are less exclamation marks and sentences are longer than in exciting, dramatic moments. To help make the calmer moments not less interesting than the exciting scenes, besides the linguistic techniques, staging or cinematic devices may be used. For example music matching to the situation on stage as a background can be played. On the end of the play John Proctor is hanged, but he wins morally. He did not lie, did not betrayed his friends and what he believed in. If Miller had finished the play after Act 3 he would not have been able to show the power of truth; how people of Salem choose to die than lie. In act 4 the audience could see essential moments for the play's message and theme. 'The Crucible' does not have a bad structure. It is written with accurate techniques, so the audience do not see the play as less interesting after the trial scene. Arthur Miller keeps the audience interested in what is presently going on at the stage by using the different, intimate kind of drama in Act 4 to complement the very highly exciting, dramatic and tense setting of the other scenes of the play. ?? ?? ?? ?? ...read more.