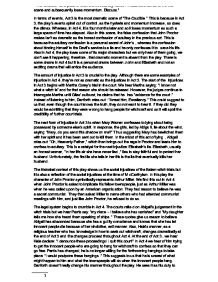 The Crucible as a piece of drama is structurally flawed. It reaches a climax is the trial scene and subsequently loses momentum. Discuss.

""The Crucible" as a piece of drama is structurally flawed. It reaches a climax is the trial scene and subsequently loses momentum. Discuss." In terms of events, Act 3 is the most dramatic scene of "The Crucible." This is because in Act 3, the play's events spiral out of control, as the hysteria and momentum increase, so does the climax. Whereas, in Act 4, it is four months later and so it loses momentum as such a large space of time has elapsed. Also in this scene, the false confession that John Proctor makes isn't as dramatic as the honest confession of adultery in the previous act. This is because the adultery confession is a personal secret of John's, whereas the confession about binding himself to the Devil's service is a lie and he only confesses it to save his life. Also in Act 4, the play loses some of its major characters but we only hear of them going, we don't see it happening; therefore, that dramatic moment is absent from the play. There is some drama in Act 4 but it is a personal drama between John and Elizabeth and not an exciting drama that will entice the audience. The amount of injustice in Act 3 is crucial to the play. Although there are some examples of injustice in Act 4, they're not as dramatic as the injustices in Act 3. The start of the injustices in Act 3 begins with Martha Corey's trial in the court. ...read more.

He believes that it is better to lie and live than to die for something that is untrue. He is acting to try and prevent innocent deaths. The painful nature of truth is a major theme in this play and we find this out when, in Act 3, Elizabeth's only lie is the lie that condemns her husband to death. We are told by Proctor that Elizabeth "will never lie." John confesses to adultery and says that Elizabeth knew about the affair. However, when she is questioned before the court Danforth asks: "Is your husband a lecher?" She replies faintly, "No, sir," to save her husband's name. This is the climax of the play as we are led to believe that Elizabeth would tell the truth as she never lies, however she doesn't. John Proctor's motives for dying are numerous. Firstly, he is willing to die for the truth. Secondly, he wants to save his name. In doing so he has regained his love for Elizabeth and even though it is too late for him at least he died having made up with his wife. He described himself as a "fraud" because he knows he has done wrong. He believes that if he was to be classed as a "saint" when he dies it would be a lie. Also, he believes that the townspeople will be worshipping him for something he has done wrong, even though they don't know it. There are many characters that change and develop in the play. An example of one of them is Hale. ...read more.

"Will John confess?" and "Who has confessed and who has died?" These questions are important to the end of the play because if they were left unanswered the play wouldn't be structurally complete. The impact of John's death helps the characters that change come to terms with their new character and those who haven't realise that their morals are wrong. Take Hale, for example, he realises in Act 3 that the morals of the court are wrong and in Act 4 when John dies because he won't confess Hale pleads with Elizabeth: "Woman plead with him." He realises that Proctor is dying for the wrong reasons. Also Parris, who is a selfish man, also pleads with her: "Go to him, Goody Proctor. Go to him." This is probably because he realises that he was selfish. He also realises that the reason for John Proctor's death is because his niece was an adulteress. In conclusion, even though John Proctor dies, it is him, not Danforth, who wins a moral victory. John Proctor died for the truth and for the love of his wife and children but Danforth believes that John Proctor died because he had lied and wouldn't confess to doing the Devil's service. This shows us that John Proctor was the better person; he also knew the girls were false and pretending. However, Danforth chose to believe immoral, little girls who thought sentencing people to death was fun. Act 3 is still the most dramatic; however, Act 4 was closer and more personal. This is because the tension and amount of events that occur in Act 3 is more theatrical than Act 4. ?? ?? ?? ?? 1 ...read more.