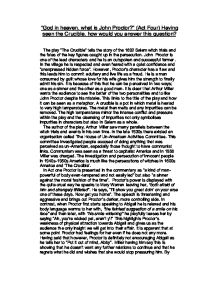 The crucible, God in heaven what is John Proctor?

"God in heaven, what is John Proctor?" (Act Four) Having seen the Crucible, how would you answer this question? The play "The Crucible" tells the story of the 1692 Salem witch trials and the fates of the key figures caught up in the persecution. John Proctor is one of the lead characters and he is an outspoken and successful farmer. In the village he is respected and even feared with a quiet confidence and "unexpressed hidden force". However, Proctor's character has a flaw and this leads him to commit adultery and live life as a fraud. He is a man consumed by guilt whose love for his wife gives him the strength to finally admit his sin. It is because of this that he can be perceived in two ways; one as a sinner and the other as a good man. It is clear that Arthur Miller wants the audience to see the better of the two personalities and to like John Proctor despite his mistake. This links to the title of the play and how it can be seen as a metaphor. A crucible is a pot in which metal is heated to very high temperatures. The metal then melts and any impurities can be removed. The high temperatures mirror the intense conflict and pressure within the play and the cleansing of impurities not only symbolises impurities in characters but also in Salem as a whole. The author of the play, Arthur Miller saw many parallels between the witch trials and events in his own time. In the late 1930s there existed an organisation called The House of Un-American Activities Committee. This committee investigated people accused of doing anything that was perceived as un-American, especially those thought to have communist links. Communism was seen as a threat to capitalist America and in 1956 Miller was charged. The investigation and persecution of innocent people in 1940s-1950s America is much like the persecutions of witches in 1600s America and 'The Crucible'. ...read more.

They show Proctor's true passion for his wife and his beliefs. A stage direction tells us Proctor is "ripping the warrant" for Elizabeth's arrest. From an audience's point of view this would be the most visually dramatic point in this scene. It is an official document and Proctor has no trouble ripping it in two. Miller has made him do this to prove to us as the audience that Proctor is not only true to himself but also the ones he loves. By making this good quality so clear, Miller allows the audience to see him as a good character. It is also at this point that Elizabeth says to Proctor, "Oh, John, bring me soon!" This shows that Elizabeth does still love her husband because she turns to him when she most needs help. She trusts that he is strong enough to be able to bring her home as she is comfortable enough to leave her fate in his hands. Once Elizabeth is taken, Proctor reveals his inner guilt and turmoil by saying, "My wife will never die for me!" He knows that Abigail accused his wife because she believes that if Elizabeth dies she, (Abigail) will be able to be with Proctor. Proctor knows that he is responsible for giving Abigail false hope and therefore Elizabeth's arrest is fundamentally his fault. He loves Elizabeth so much and the thought of her dying for him is making him mad. His whole body language is angry and aggressive because of this. As he speaks to Mary Warren he is "grasping her by the throat as though he would strangle her". He is so violent because he clearly feels responsible for what has happened and is willing to go to any lengths to make it right. In Act three Proctor is told that his wife is pregnant and that she will be safe until the child is born, but still he carries on with his case against the children. ...read more.

She loves him enough to give up her own happiness for his release. Her forgiveness is no longer enough, he needs to forgive himself and he can only truly do that by dying. Her words are proof that she refuses to take away his goodness now that he has finally got it. Returning to the question, "God in heaven, what is John Proctor?" I feel that he is a good character. He is a tragic hero because he has many positive traits to his personality as well as a darker side. This darker side is shown through his affair with Abigail Williams. His fatal flaw is a need for physical affection that eventually leads to his downfall. His whole life is consumed by living with the secret of a mistake he will never forgive himself for. He resented his wife for not being able to forgive him. However, she saw, as he could not, that he was guilty of the same action, "John, it come to naught that I should forgive you, if you will not forgive yourself." she cautions. Finally Proctor is able to save his soul and wipe away his sins by dying. I feel that the audience will be able to empathise with the character of John Proctor better because of his flaw. He is only human and everyone makes mistakes, so it is therefore a lot easier to relate to someone who is not perfect. We can forgive him for his sin because he shows genuine remorse and displays great love for his wife. He also demonstrates incredible courage by his willingness to die for his beliefs and ensure that his friends did not die in vain. In my opinion John Proctor is a good man whose life was destroyed by one mistake which set in motion the train of events which led to his execution. I admire the character of John Proctor because he is someone who always stood by his principles even when he was given the opportunity to save himself and denounce them. ...read more.