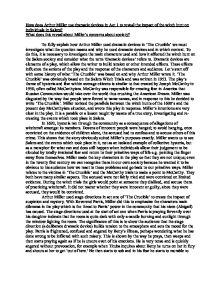 The Crucible - How does Arthur Miller use dramatic devices in Act 1 to reveal the impact of the witch hunt on individuals in Salem?

How does Arthur Miller use dramatic devices in Act 1 to reveal the impact of the witch hunt on individuals in Salem? What does this reveal about Miller's concerns about society? To fully explain how Arthur Miller used dramatic devices in 'The Crucible' we must investigate what the question means and why he used dramatic devices and in which context. To do this, it is necessary to investigate the main characters used and how it affected the witch hunt on the Salem society and consider what the term 'dramatic devices' refers to. Dramatic devices are elements of a play, which allow the writer to build tension or other intended effects. These effects influence the actions of the play and the response of the characters and audience. Let's start off with some history of what 'The Crucible' was based on and why Arthur Miller wrote it. 'The Crucible' was obviously based on the Salem Witch Trials and was written in 1953. The play's theme of hysteria and fear within average citizens is similar to that created by Joseph McCarthy in 1950, often called McCarthyism. McCarthy was responsible for creating fear in America that Russian Communism would take over the world thus crushing the American Dream. Miller was disgusted by the way that people were forced to name names, and in response to this he decided to write 'The Crucible'. ...read more.

Paris appears to be an egotistical man who is more concerned with his reputation rather than the 'illness' of his child. Paris' personality causes many to turn away from him and his church which will ultimately affect their fate. Reverend Parris is the type of character Miller created to represent people who agree with McCarthyism. This is because we are shown that he would follow the crowd if the situation could benefit him. Many people followed and accepted McCarthy's ways to avoid being accused and so did Parris in the play. When we are first introduced to Tituba, it becomes obvious that she has a very low status because 'as always, trouble in this house eventually lands on her back.' This shows us that Reverend Paris has little regard of the human rights for the Barbados slave and is racist towards her probably because her culture is different to his and so he is uneasy about what she could be saying/doing without him knowing about it. Also at the start of the act, we see Tituba 'already taking a step backward' when confronted with Parris. This movement represents her fear of Parris and his control over her. By doing this she is showing him respect. Arthur Miller used this stage direction as a dramatic device to describe the low status she has and build tension around her character. ...read more.

If the people of his time came to realize why he was then questioned for being communist they may have guessed why. Arthur Millers philosophy was that the McCarthy trials were not morally right because there was little evidence to suggest that hundreds of the people accused of communism were guilty. Miller used dramatic devices in 'The Crucible' to influence the opinion of the audience by using relevant stage directions, body language, movement and expressions throughout the play to illustrate how different characters respond to the accusations. The roles of Abigail, Parris and Tituba reflect Millers sense of truth and justice by comparing them with the different types of people who were present in McCarthy's time and how they reacted to the trials. Miller has achieved this by using dramatic devices. The momentum Arthur Miller built in Act One of 'The Crucible' was to show what devastating havoc could be created by false accusations. By the end of the act, to the audience's eyes the amount of accusations already seems almost ridiculous; however the same thing was happening in Miller's time when so many people were wrongly accused of being communist. The effect of his work could have led to changing society in Miller's own time, revealing how out of hand the McCarthy trials were becoming to the public. He showed his concerns about his own society through his play 'The Crucible.' Emma Durham ?? ?? ?? ?? ...read more.

The essay starts well, with quite a good introduction, setting the historical and social context of both the setting of the action and the date of writing. Some good points are made about the use of stage directions and how the impact of the witch trials is delivered upon the characters in the play. However, the essay then drifts into a general summary of plot elements and character analysis. There is also only an analysis of Act 1, Scene 1 and nothing on Act 1, Scene 2. The conclusion, again, does not focus effectively on the requirements of the prompt.

There is quite good paragraph management and sentence control, marred by a few slips in grammar and punctuation.