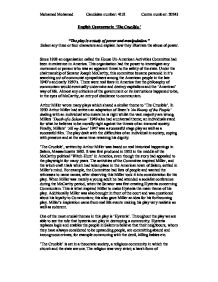 The Crucible - Power and Manipulation

English Coursework: 'The Crucible.' "The play is a study of power and manipulation." Select any three or four characters and explain how they illustrate the abuse of power. Since 1938 an organisation called the House Un-American Activities Committee had been in existence in America. This organisation had the power to investigate any movement or person who was an apparent threat to the safety of the state. Under the chairmanship of Senator Joseph McCarthy, this committee became paranoid in it's searching out of communist sympathisers among the American people in the late 1940's and early 1950's. There were real fears in America that the philosophy of communism would eventually undermine and destroy capitalism and the 'American' way of life. Almost any criticism of the government or its instructions happened to be, in the eyes of McCarthy, an entry of obedience to communism. Arthur Miller wrote many plays which shared a similar theme to 'The Crucible'. In 1950 Arthur Miller had written an adaptation of Ibsen's 'An Enemy of the People' dealing with an individual who insists he is right whilst the vast majority are wrong. Millers 'Death of a Salesman' 1949 also had a universal theme; an individuals stand for what he believes to be morally right against the threats of an immoral society. Finally, Millers' 'All my Sons' 1947 was a successful stage play as well as a successful film. The play dealt with the difficulties of an individual in society, coping with pressure and at the same time retaining his dignity. 'The Crucible', written by Arthur Miller was based on real historical happenings in Salem, Massachusetts 1692. It was first produced in 1953 in the middle of the McCarthy political 'Witch-Hunt' in America, even though the story had appealed to the playwright for many years. The activities of the Committee inspired Miller, and the witch-craft trials which had taken place in the American town of Salem, settled in Miller's mind. ...read more.

But he say 'You work for me Tituba, and I make you free! I give you pretty dress to wear, and put you way up high in the air, and you gone fly back to Barbados!' The most obvious reason for Tituba's actions was to save her life. She could have also abused her power to be the first to take control over the situation occurring in Salem. Another character in the play that mistreated his power to its full potential is Reverend Samuel Parris. Parris was the minister of Salem's church. He was a paranoid, power-hungry and self-pitying man. Parris was very concerned with building his position in the Salem community, and individuals such as John Proctor dis-liked him. Parris strengthened his position within the village by creating distrust amongst the people like John Proctor who questioned his authority. Being the minister of the church Parris could not be doubted as to whether he was doing his profession correctly or suspected of abusing his power, as the vast majority of the community assumed that he was a civil and devout man. It is for this reason also that Abigail is not a focal suspect of witch craft because she was the niece of Parris and therefore was strongly associated to the church as well. Being a part of the church or even associated to it was a great strength. The reason for this is because both the church and the court worked as one, so together they were considered to be loyal Christians who were performing their utmost best for the health of Salem which had become an ill society. Parris: "There is either obedience or the church will burn like hell is burning!" Reverend Parris had said this for the congregation of Salem to believe that he truthfully wanted a peaceful society in Salem where individuals were submissive and worked as one, but in actual fact by this he meant that if the congregation were to simply respect and follow him, only then would they have a successful society. ...read more.

Danforth: Look you, sir. I think you mistake you duty here. Your soul is the issue here Mister, and you will prove its witnesses or you cannot live in a Christian country. Proctor: I speak my own sins; I cannot judge another. Hale: (Quickly to Danforth) Excellency, it is enough he confess himself. Let him sign it. Danforth: Come, then, sign your testimony. (To Cheever) Give it to him. (Cheever goes to Proctor, the confession and a pen in hand. Proctor does not look at it.) Proctor hesitates. Proctor: I will not. You have all witnessed it- it is adequate. Elizabeth: (Weeps desperately) John please... Hale: (Taken aback) Man, do as they ask! If you don't you will hang! Danforth: You will not sign it? Proctor: What more is needed? You have all witnessed it. Hale: Do as they ask, sign the testimony! Elizabeth: Oh John, don't do this! Not now! (She weeps severely) I love you. Don't you want to live? You have the chance to survive John, please take it. Proctor: But Elizabeth- Elizabeth: No John, there is nothing left to consider, sign the testimony and we can go back home, where we belong, you, me and the children. Please John I'm begging with you. Hale: Your wife pleads with you John- Proctor: (He is in deep thought as if unaware if his surroundings) Ok, I will do this... Danforth: Cheever- (Cheever returns with the confession and a pen in hand.) Proctor signs the testimony. Elizabeth cries with relief. Hale raises a gentle smile and Danforth appears as a very content man. Danforth: (He turns to Rebecca) I say, will you confess yourself, Goody Nurse? Rebecca: Why, it is a lie, it is a lie; how may I damn myself? I cannot. How can you damn yourself this way John? May God send his mercy on you! John leaves with his arm around his wife Elizabeth who is crying tears of joy, whilst he keeps his head down in doubt of his decision and feeling mortified. ?? ?? ?? ?? Mohamed Mohamed Candidate number: 4131 Centre number: 20243 ...read more.