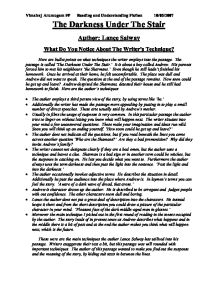 The Darkness Under The Stair by Lance Salway - What Do You Notice About The Writer's Technique?

The Darkness Under The Stair Author: Lance Salway What Do You Notice About The Writer's Technique? Here are bullet points on what techniques the writer employs into the passage. The passage is called 'The Darkness Under The Stair.' It is about a boy called Andrew. His parents forced him to met his neighbours 'the Sharmans.' Even though he still hadn't finished his homework. Once he arrived at their home, he felt uncomfortable. The place was dull and Andrew did not want to speak. The question at the end of the passage remains. How soon could he get up and leave? Andrew despised the Sharmans, detested their house and he still had homework to finish. Here are the author's techniques: * The author employs a third person view of the story, by using terms like 'he.' * Additionally the writer has made the passage more appealing by putting in to play a small number of direct speeches. These arte usually said by Andrew's mother. * Usually in films the usage of suspense is very common. In this particular passage the author tries to linger on without letting you know what will happen next. ...read more.

Writers exaggerate their text a bit, but this passage was will rounded with important techniques. The author of this passage wanted to make you find out the suspense and the meaning of the story, by hiding sub texts in between the lines. How Successful Is This As The Opening Of A Ghost Story? Here is another set of bullet points, but this time I am describing how successful the text is? How the author achieved it? And has the author achieved the success of the text? As you know from before it is the same story about the boy Andrew, but I am answering the questions I have stated. Keeping in mind this is an opening of a story. I will be making a judgement on the passage through out the bullet points and will be putting my opinion at the end. Here are the successes of the opening passage of the story 'The Darkness Under The Stair': * The opening of this ghost story is written to 'hook' you on to the story while it is moving. The author has not made any special ghost openings (i.e. it was a gloomy dark day. ...read more.

Putting it in characters to make shows this you wonder whom they are and into what will happen next. The suspense is also to find out why the title is 'The Darkness Under The Stair.' There is a smidgen of scenery suspense. Makes you speculate why the scene is set in a modern house. 'A wide wooden stair case rose into shadow.' * The author has achieved the success with the suspense and questions made in the opening of the chronicle. I suppose success was the gradually start of the story and moving slowly with diminutive description of characters. Soon creating suspense and lastly making you invent your own answers to the unanswered questions you thought of, which the story has put into your intellect. Personally I will articulate that Lance Salway the author of the story 'The Darkness Under The Stair' has achieved what he wished would be success for him. He has the use of suspense, and the slow moving of a ghost story. He has not included any excitement at the first, but makes you want to read on ad find out why the chronicle is called 'The Darkness Under The Stair.' The techniques used in the novel is linked with the success of the opening of the story. Vimalraj Arumugam 9P Reading and Understanding Fiction 10/05/2007 ...read more.