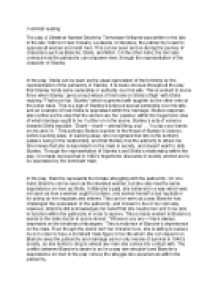 The Depiction of Patriarchy in &quot;A Streetcar Named Desire&quot; by Tennessee Williams

﻿Feminist reading: The play A Streetcar Named Desire by Tennessee Williams was written in the late in the late 1940?s in New Orleans, Louisiana. In literature, the patriarchy is said to oppress all women and most men. This can be seen as true during the journey of characters such as Blanche, Stella, and Mitch. On the other hand, the text also conveys how the patriarchy can empower men, through the representation of the character of Stanley. In the play, Stella can be seen as the usual oppression of the feminine by the representation of the patriarchy in Stanley. It is made obvious throughout the play that Stanley holds some ownership or authority over his wife. This is evident in scene three when Stanley ?gives a loud whack of his hand on Stella?s thigh? with Stella replying ?That?s not fun, Stanley? which is greeted with laughter by the other men at the poker table. ...read more.

This is made evident in Blanche?s words to the male doctor in scene eleven. ?Whoever you are?I have always depended on the kindness of strangers.? This is evidence of Blanche?s dependence on the male. Even though the doctor isn?t her chivalric hero, she is willing to believe he is in order to have a dominant male figure in her life whom she can depend on. Blanche sees the patriarchy and marriage as her only means of survival in 1940?s society, so she tends to cling to almost any man she comes into contact with. The conflict between Blanche?s desire to act in a way she shouldn?t and Blanche?s dependence on men in the play convey the struggle she experiences within the patriarchy. In the play, Mitch is seen as the sensitive male who is often oppressed by the patriarchal society in which he lives, the direct opposite of Stanley. Throughout the play Mitch treats his mother with more reverence than his friends. ...read more.

In scene ten of the play, Stanley seeks ownership over Blanche in the same way. This can be seen through his dialogue ?we?ve had this date from the beginning? before he initiates the rape of Blanche. Through this quote, it is evident that Stanley believes he is entitled to receive something from Blanche, before he takes it through raping her. This represents the belief of the patriarchy?s entitlement to women, and reinforces the idea that Stanley embodies all that is the patriarchy. The character of Stanley Kowalski represents how the patriarchy can empower men within the text. In the play A Streetcar Named Desire by Tennessee Williams written in the late 1940?s, different characters are used to create different representations of the patriarchy within society. Stella represents the typical woman within patriarchy, Blanche represents the woman struggling within patriarchy, Mitch represents the male oppressed by patriarchy, while Stanley is the embodiment of patriarchal values. The play reinforces the idea that the patriarchy oppresses all women, while oppressing most men through these character representations. ...read more.