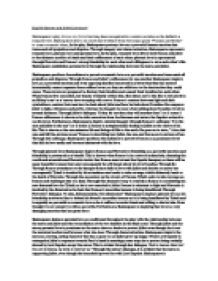 ﻿English Romeo and Juliet Literature Shakespeare?s play, Romeo and Juliet, has long been recognized in western societies as the definitive romantic text. Shakespeare draws on contextual evidence from the roman poem ?Pyramis and thisbe? to create romantic ideas. In the play, Shakespeare portrays love as a powerful human emotion that transcends all prejudices and disputes. Through imagery and characterisation, Shakespeare represents romantic love, platonic love and parental love. In the play, romantic love drives both Romeo and Juliet to the ultimate sacrifice of death and their selflessness of each other; platonic love is represented through Mercutio and Romeo?s strong friendship for each other and willingness to save each other?s life. Shakespeare establishes parental love through the relationship between the nurse and Juliet. Shakespeare positions the audience to perceive romantic love as a powerful emotion and transcends all prejudices and disputes. Through Romeo and Juliet?s selflessness for one another Shakespeare depicts love, as a powerful emotion and even opposing families immersed in a bitter feud that has existed interminality cannot separate these selfless lovers, as they are oblivious to the destruction they could cause. ...read more.

Through platonic love Shakespeare depicts Romeo and Mercutio?s friendship as a powerful emotion and friendship is portrayed as a benefit. This is shown when Romeo is in a state of melancholy, shunning the world and miserable and Mercutio insists that Romeo must attend the Capulet banquet, as there will be many beautiful woman there and consequently he will forget about his love Rosaline. Through Be Through Romeo attendance to the banquet Romeo falls in love with Juliet and decides to marry her consequently Tybalt is insulted by his attendance and seeks to take revenge, which ultimately leads to the death of Mercutio. Through the encounter on the streets of Verona, Tybalt seeks to take revenge on Romeo and challenges him to a dual. Through this dramatic irony is created as Romeo is considering his new fraternal love for Tybalt; as he is now married to Juliet. Romeo is reluctant to fight and Mercutio is insulted by his dismissal as he feels that Romeo?s masculine honour is being humiliated. ...read more.

Thus creating a sense of dramatic irony. Shakespeare further creates parental love in the final scene of the play as Lord Capulet and Lord Montague share their love for their daughter and son in a potent manner as they are reconciling. The playwright illustrates this by the Capulet saying ?O brother Montague, give me thy hand: This is my daughter's jointure, for no more can I demand.? and the Montague replying, ?For I will raise her statue in pure gold; That while Verona by that name is known, There shall no figure at such rate be set as that of true and faithful Juliet.? Through this longwinded dialogue Shakespeare depicts the feud between the two families as the ultimate sacrifice of the son and daughters death. Shakespeare deduces recompense and shows Lord Capulet?s ultimate love for his daughter choices as they are aware of their feud that has ultimately cost them the lives of their son and daughter and in Lord Montague?s case, his way aswell. Word Count : 978 ...read more.