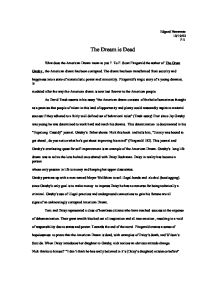 The Dream is Dead - The Great Gatsby

Edgard Navarrete 10/19/02 P.3 The Dream is Dead What does the American Dream mean to you ? To F. Scott Fitzgerald the author of The Great Gatsby , the American dream has been corrupted. The dream has been transformed from security and happiness into a state of materialistic power and immorality. Fitzgerald's tragic story of a young dreamer, is modeled after the way the American dream is now lost forever to the American people. As David Trask asserts in his essay "the American dream consists of the belief sometimes thought as a promise that people of talent in this land of opportunity and plenty could reasonably aspire to material success if they adhered to a fairly well defined set of behavioral rules" (Trask essay) ...read more.

This journal and Gatsby's everlasting quest for self-improvement is an example of the American Dream. Gatsby's long life dream was to relive the love he had once shared with Daisy Buchanan. Daisy in reality has become a person whose only passion in life is money and keeping her upper class status. Gatsby partners up with a man named Meyer Wolfshien to sell illegal bonds and alcohol (bootlegging). since Gatsby's only goal is to make money to impress Daisy he has no remorse for being technically a criminal. Gatsby's use of illegal practices and underground connections to gain his fortune are all signs of an unknowingly corrupted American Dream. ...read more.

When Daisy introduces her daughter to Gatsby, nick notices an obvious attitude change. Nick thinks to himself "I don't think he has really believed in it's (Daisy's daughter) existence before" (Fitzgerald 123). Daisy refers to her daughter as an "absolute dream" crushing any hopes any hopes of Gatsby recreating the past. When Gatsby dies any hope of the modern American dream has of surviving in the new corrupt, money hungry world dies with him. When George Wilson commits suicide, the hope of the true hard working man making it in the new corrupt world drift away with his soul. With the story of Gatsby's tragic idealistic love, Fitzgerald simultaneously shows the end of American values. The American dream has been forever forgotten by human greed and the love for money. ...read more.