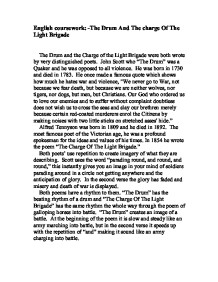 The Drum And The charge Of The Light Brigade.

English coursework: -The Drum And The charge Of The Light Brigade The Drum and the Charge of the Light Brigade were both wrote by very distinguished poets. John Scott who "The Drum" was a Quaker and he was opposed to all violence. He was born in 1730 and died in 1783. He once made a famous quote which shows how much he hates war and violence, "We never go to War, not because we fear death, but because we are neither wolves, nor tigers, nor dogs, but men, but Christians. Our God who ordered us to love our enemies and to suffer without complaint doubtless does not wish us to cross the seas and slay our brethren merely because certain red-coated murderers enrol the Citizens by making noises with two little sticks on stretched asses' hide." ...read more.

In the second verse the glory has faded and misery and death of war is displayed. Both poems have a rhythm to them. "The Drum" has the beating rhythm of a drum and "The Charge Of The Light Brigade" has the same rhythm the whole way through the poem of galloping horses into battle. "The Drum" creates an image of a battle. At the beginning of the poem it is slow and steady like an army marching into battle, but in the second verse it speeds up with the repetition of "and" making it sound like an army charging into battle. In the "The Charge Of The Light Brigade" Tennyson describes the soldiers to be heroes. He uses a variety of language to convey his point. ...read more.

It is obvious the whole way through the poem that Tennyson is bias on behalf of the "Light Brigade," and the last verse reinforces this point as he pays tribute to the "Noble six hundred." Scott has a different approach to war than Tennyson, he shows that the drum is a symbol of war, and with every beat this reminds him of "misery" and "death" that war brings. Scott describes how the drum attracts "thoughtless youth" (young men) from the cities and the fields "To sell their liberty for charms of tawdry lace," in other words they are selling their liberty for uniforms and they are so ambitious they are willing to do anything they are commanded to do. Scott then shows in the second verse how the young men have been lured into dying "In foreign land," and now they have turned wives into widows and sons into orphans. ...read more.