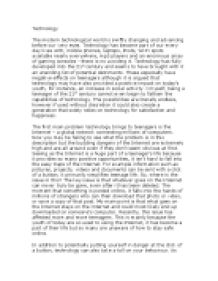 The effects of technology on teenagers

﻿Technology The modern technological world is swiftly changing and advancing before our very eyes. Technology has become part of our every day lives with, mobile phones, laptops, iPods, Wi-Fi spots available nearly everywhere, mp3 players and an enormous array of gaming consoles - there is no avoiding it. Technology has fully developed into the 21st century and seems to have brought with it an unending list of potential detriments. These especially have negative effects on teenagers although it is argued that technology may have also provided a positive impact on today?s youth, for instance, an increase in social activity. I myself, being a teenager of the 21st century cannot even begin to fathom the capabilities of technology. The possibilities are literally endless, however if used without discretion it could also create a generation that solely relies on technology for satisfaction and happiness. The first main problem technology brings to teenagers is the Internet ? a global network connecting millions of computers. ...read more.

Recently, this issue has affected more and more teenagers. This is mainly because the youth of today are so used to using the Internet, it has become a part of their life but so many are unaware of how to stay safe online. In addition to potentially putting yourself in danger at the click of a button, technology can also take a toll on your behaviour. As teenagers we are still discovering ourselves and establishing our identities. The majority of us have a strong desire for acceptance in society and the images that are available for teenagers to see on the Internet or on television have a strong effect on the process of becoming who we are. These images often stimulate the ideals of the perfect body or how you should behave, especially for young girls. In one study, 69% of girls said that models they see on television fix their idea of what a perfect body shape is. ...read more.

It is the one thing that has developed the most throughout the years; almost to an extent where people rely on it so much they cannot live without it. It is certainly a huge aspect of young people?s lives as a recent survey showed that 93% of all teenagers aged 12-17 uses the Internet or emails. The worrying statistic is that 58% of teens don?t believe that posting photos or other personal information on social networking sites is unsafe. Things like this are an even bigger aspect of teenage life and unfortunately also reflects life in the 21st century as teenagers are becoming increasingly active online and are at a high risk of falling into the trap of online predators. Nevertheless, I am not completely against technology. I am part of that 93% of teenagers and of course it does have its benefits too, such as educating us, making life easier and simply for its entertainment and social capabilities. ...read more.