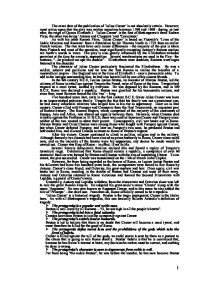 The exact date of the publication of 'Julius Caesar' is not absolutely certain. However, most critics agree that the play was written sometime between 1598 and 1608 - during, or just after, the reign of Queen Elizabeth I.

The exact date of the publication of 'Julius Caesar' is not absolutely certain. However, most critics agree that the play was written sometime between 1598 and 1608 - during, or just after, the reign of Queen Elizabeth I. 'Julius Caesar' is the first of Shakespeare's three Roman Plays, the other two being 'Antony and Cleopatra' and 'Coriolanus'. As with his other Roman Plays, 'Julius Caesar' is based on Plutarch's 'Lives of the Noble Grecians and Romans' from a translation by Sir Thomas North in 1579 from an earlier French version. The two texts have only minor differences - the majority of the plot is taken from Plutarch and most of the speeches, most significantly excepting Antony's famous oration, are North's words in verse. The play is also greatly influenced by the Elizabethan attitudes prevalent at the time for example, superstition. Several anachronisms are used in the Play - for instance, "...he plucked me ope his doublet". Elizabethans wore doublets; Romans wore togas fastened at the shoulder. The character of Julius Caesar particularly fascinated the Elizabethans. He was a soldier, scholar and politician and he was the first Roman to realise the benefits of a monarchical empire - like England was at the time of Elizabeth I - over a democratic state. To add to the intrigue surrounding him, he had also been killed by one of his closest friends. In the 6th century B.C.E, Lucius Junius Brutus, an ancestor of Marcus Brutus, led the citizens of Rome in rebellion against Tarquin the Proud, ruler of Rome at the time. Tarquin had reigned as a cruel tyrant, loathed by everyone. He was deposed by the Romans, and in 509 B.C.E, Rome was declared a republic. Brutus was glorified for his honourable actions, and since then, most Romans feared the title 'rex' - king. Five hundred years later, early in the first century B.C.E, Gaius Julius Caesar was born to an impoverished patrician family. ...read more.

He links himself with them - "Then I, and you, and all of us fell down", making them feel that they are his equals unlike Brutus, who set himself apart from them. While Brutus talks of honour, and the reasons for the assassination, Antony shows the citizens things they can relate and respond to - the corpse, Caesar's cloak. He personifies every tear in Caesar's cloak, making the scene all the more poignant. The crowd is convinced: the conspirators, especially Brutus, must be sought and killed for having committed such an odious sin. Antony has succeeded: "Now let it work: mischief, thou art afoot, Take thou what course thou wilt!" Here we see Antony's ambition; while Caesar was alive, he was content to be his friend and influence his decisions regarding Rome, but once he was dead, Antony would stoop to any means to attain power over Rome. From the reaction of the crowd to these two speeches, we see their fickleness and disloyalty. Anyone with the power of persuasion could easily convince them to follow in his way of thinking. At the beginning of the play, a holiday has been called in honour of Caesar's victory over Pompey's sons. A few months later, "This Caesar was a tyrant", and barely two hours after that, he is once again "Most noble Caesar". When we think of Rome, we do not visualise a city of inconsistent, weak citizens but a great and advanced culture, well built cities filled with powerful, important men. Yet, the common people could have played a vital role in Roman life - it was up to them who would be their leader and what kind of a leader he would be. Cassius laments the fact that "our fathers minds are dead", replaced by "our mothers' spirits". Remarkably, during the first three acts of the play, Antony is not mentioned much. All we know about him before Act III is that he is a lively sportsman, he loves plays, and he "revels long o' nights". ...read more.

The two main women in 'Julius Caesar', i.e. Calphurnia and Portia, also play an important role. They care deeply for their husbands, and Portia especially is also extremely courageous. In order to convince her husband that she is brave enough a woman to share his secrets with, she stabs herself with a sword: "Giving myself a voluntary wound Here, in the thigh:" Later on, she "swallow'd fire" in her distress upon hearing that her husband had been unsuccessful in his "enterprise" and was now in battle. Calphurnia, unlike Portia, has no noble objectives for herself or her husband. However, like Portia, she suffers because of her husband's actions. It is through her that we see Caesar's more human dimensions - in spite of her small role in the play, she is vital to its development. Caesar agrees to stay at home "for thy humour" - he evidently loves her, although he does not show his love as openly as Brutus does; possibly he thinks that love is another emotion confined only to ordinary mortals. Calphurnia is very superstitious. Her dream of Caesar's statue spouting blood "in which so many smiling Romans bathed" is prophetic, she realises that "when beggars die there are no comets seen" therefore, the terrible tempest must be an omen of Caesar's downfall. The Elizabethans were also great believers in superstition, and could therefore identify with Calphurnia's fears. They understood that whenever Shakespeare used storms or other natural disasters in his plays, he was portraying the anger of G-d. To the Elizabethans, Rome was synonymous with power. This belief was based on historical knowledge, as it was well known that Rome was a great and important empire. They expected 'Julius Caesar' to be about power and ambition because it fitted in with their idea of Rome. Loyalty was expected from the Roman subjects - but allegiance to the country did not necessarily mean devotion to the ruler. However, in the opinion of the Elizabethans, Caesar was worthy of their loyalty. 1 1 ...read more.