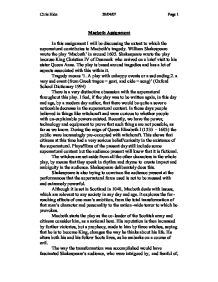 The extent to which the supernatural contributes to Macbeth&amp;#146;s tragedy

Macbeth Assignment In this assignment I will be discussing the extent to which the supernatural contributes to Macbeth's tragedy. William Shakespeare wrote the play 'Macbeth' in around 1605. Shakespeare wrote the play because King Christian IV of Denmark who arrived on a brief visit to his sister Queen Anne. The play is based around tragedies and has a lot of aspects associated with this within it. Tragedy means '1. A play with unhappy events or a sad ending.2. a very sad event (from Greek tragos = goat, and oide = song)' (Oxford School Dictionary 1994) There is a very distinctive obsession with the supernatural throughout this play. I feel, if the play was to be written again, in this day and age, by a modern day author, that there would be quite a severe noticeable decrease in the supernatural content. In those days people believed in things like witchcraft and were curious to whether people with un-explainable powers existed. Recently, we have the power, technology and equipment to prove that such things are not possible, as far as we know. During the reign of Queen Elizabeth I (1533 - 1603) the public were increasingly pre-occupied with witchcraft. This shows that citizens at this time had a very serious belief/curiosity in the existence of the supernatural. Plays/films of the present day still include some supernatural content but the audience present will know that it is fictional. The witches are set aside from all the other characters in the whole play, by means that they speak in rhythm and rhyme to create impact and ambiguity in the audience. Shakespeare deliberately does this. Shakespeare is also trying to convince the audience present at the performances that the supernatural force used is not to be messed with and extremely powerful. Although it is set in Scotland in 1040, Macbeth deals with issues, which are relevant to any society in any day and age. ...read more.

This particular part of this scene has to be the climax of the play. When Macbeth and his wife are re-united they are both highly charged with nervous energy and excitement. Macbeth and his wife at first do not speak in sentences. Their speech is syncopated and highly charged emotions tell the audience all is not well. The fact that Macbeth still has hold of the daggers intensifies the tension felt in the scene. His hands would be covered in blood, which would make the drama explosive. Macbeth however, describes the horrors of the murder and cannot seem to believe he has committed such an evil crime, 'This is a sorry sight'. Thoughts of the murder plague his mind. He appears transfixed and very troubled by his deeds. Whilst Lady Macbeth in a way mocks him, she remains steadfast and tells him to 'Go get some water, and wash this filthy witness from your hand'. Macbeth does not agree with her. He knows he will never be cleansed of this vile deed. Macbeth says, 'Not all great Neptune's ocean can wash then clean'. Lady Macbeth mocks her husband for dwelling upon the murderous act. Macbeth and his wife seem to lose their rapport; Shakespeare makes it obvious to the audience that Macbeth has the weaker spirit and that the relationship is rapidly falling apart. He shows this via the nervous ramblings of Macbeth, he appears to have lost all insight, whereas Lady Macbeth appears to have become more evil, calculating and in control. Tension is increased by the thought of the words heard by Macbeth, whilst committing the murder, 'Glamis hath murther'd sleep, and therefore Cawdor shall sleep no more: Macbeth shall sleep no more'. Is this yet another of the witches prophesies? The tension is increased yet again by the loud knocking on the door. Macbeth in his highly anxious state knows now, weather is crime is found out or not, he will never be cleansed of this murderous act. ...read more.

The Lady thinks of nothing but success and is perhaps already aware of the spiritual importance of her role as she urges Macbeth's swift return, 'Hie thee hither, That I may pour my spirits in thine ear.' Lady Macbeth is determined to galvanize her weak willed husband into claiming, that which is offered. She is prepared to sacrifice everything, even her femininity, to fuel her murderous intent. The Lady pays little thought to future repercussions, as she invokes the spirits to assist her. She wishes for the inner strength of man as she invites the spirits to, 'unsex me here,' removing her feminine guile, so she may be possessed with man's ability to perpetrate evil. 'Stop up th'access and passage to remorse That no compunctious visitings of nature Shake my fell purpose nor keep peace between Th'effect and it. Come to my woman's breasts And take my milk for gall, you murd'ring ministers,' The Lady becomes the dominant force in the partnership, as she schools Macbeth in the art of deceit, she warns him to hide any thought of their deadly intentions. 'Your face my thane, is as a book where men May read strange matters. To beguile the time Look like the time, bear welcome in your eye,' Her purpose is clear; as she implores Macbeth to, 'put The night's great business into my despatch.' She shows no compunction as she endeavours to bring about what she now desires, urging him, 'Leave the rest to me.' As she feared, Macbeth's resolve begins to weakens as he protests, 'We will proceed no further in this business,' Lady Macbeth berates her husband for his lack of conviction, she questions his love for her; she mocks him, saying that he is less than a man, accusing him of being drunk and a coward. She speaks of a smiling babe she once nursed and how she would have, 'dashed the brains out, had I so sworn.' Her loyalty to him is unfaltering as he procrastinates. Chris Hide 28/04/07 Page 1 ...read more.