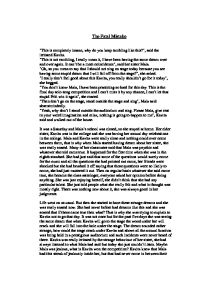 The Fatal Mistake "This is completely insane, why do you keep rambling like this?", said the irritated Kavita. "This is not rambling, I really mean it, I have been having the same dream over and over again. It can't be a mere coincidence", said her sister Mala. "Oh, so you mean to say that I should not sing on stage today because you are having some stupid dream that I will fall off from the stage?", she asked. "I really don't feel good about this Kavita, you really shouldn't go for it today", she begged. "You don't know Mala, I have been practicing so hard for this day. This is the final day solo song competition and I can't miss it by any chance, I can't let that stupid Priti win it again", she roared. "Then don't go on the stage, stand outside the stage and sing", Mala said absentmindedly. "Yeah, why don't I stand outside the auditorium and sing. Please Mala, give rest to your weird imagination and relax, nothing is going to happen to me", Kavita said and walked out of the house. It was a Saturday and Mala's school was closed, so she stayed at home. Her elder sister, Kavita was in the college and she was having her annual day celebrations in the college. Mala and Kavita were really close and nothing could ever come between them, that is why when Mala started having dream about her sister, she was really scared. Many of her classmates said that Mala was psychic and whatever she told came true. It happened for the first time when she was in the eighth standard. She had just said that some of the questions would surely come for the exam and all the questions she had pointed out came, her friends were shocked but she had brushed it off saying that those questions were so likely to come, she had just muttered it out. ...read more.

"Yeah, that would be great", she looked startled. "So will meet you tomorrow at four", he said. "Yeah", she managed to mutter and ran all the way back to her house. She had really started to like Nakul a lot. It had been three years she had watched Nakul and this was the first time she had come in contact with him and she was really excited. That night again she had the same dream about Kavita and she again got up drenched in sweat. This was really scary now, this dream was something really serious and she didn't want anything to happen to Kavita. But she kept her fears to herself. The next day dawned. School was really boring. When she came back home, Kavita had already come back from the college. She was lying on the bed reading a novel, as usual. Mala tiredly sat on her bed and looked at Kavita. She gasped in shock. Kavita was reading "Accident by Daniel Steel". "Where did you get that book from?", Mala asked. "This is Sweta's book, she gave it to me", she replied. "I never knew you read Daniel Steel?", she glared at her. "Sweta told me that this was really an emotional story and I would love it", she said. "Why did you come back early from college?", she asked. "The lecturer was absent. Anyway one of my classmate is coming here today, he has some doubts in economics", she said. "Which classmate?", she asked. "You don't know him, even I didn't know that he stayed in our apartments till today", she said. "Fine! I am going to Neha's house, we have to do our homework together", she said picking up her books. "When will you be back?", Kavita asked. "In an hour, I have to go for Badminton practice after that", she said, she had goosebumps all over her when she thought of Nakul. ...read more.

Because you love him and want him, you can't do this to me, you can't. I won't let him go away from me", she looked really flared up. "Listen Mala! You don't know a thing about Mala, he will never love you because....", before she could complete her sentence, Mala had poked the knife she had brought in her bag into her stomach. Kavita gasped in horror. She turned and tossed in pain. She had a pen in hand and in the book she wrote "mala" , It's mirror reflection when Mala saw looked like "alam". Kavita lay dead in a few seconds. Mala quietly cleaned all the fingerprints from the knife and kept it over the body. Then minutes later she screamed. Hearing her all the neighbours rushed to the house. Mala ran out like a mad girl and soon the police had arrived. Mala was in no condition to speak, everyone knew that she had loved her sister so much. The police registered the case as a robbery cum murder, the thief had come to rob the place but Kavita saw him and in order to save him he killed Kavita. All the while Mala was in the hall watching her favourite cartoon "Snow White". A week later, everything came back to normal. Mala again started to practice badminton with Nakul. That day Nakul had come with a friend of his. He introduced him to Mala. "Mala, this is Yash, my boyfriend", he said. "Hi Yash, Nakul why did you refer to him as your boyfriend, you could have called him your friend. Boyfriend seems so weird", she said. Nakul looked towards Yash and he smiled back. "Mala you have become a good friend of mine so I wouldn't hide it from you. He is my boyfriend, I am a gay", he said frankly. Mala looked stoned. She froze to her bones. She ran all the way to her house and sat on the bed. Kavita was so right, "Kavita I am so sorry, I am so sorry.....you were right.....He could never love me......he could never love me", Mala cried. ...read more.