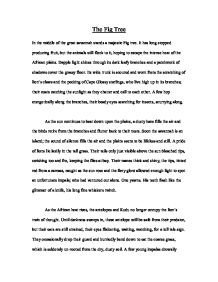 The Fig Tree In the middle of the great savannah stands a majestic Fig tree. It has long stopped producing fruit, but the animals still flock to it, hoping to escape the intense heat of the African plains. Dapple light shines through its dark leafy branches and a patchwork of shadows cover the grassy floor. Its wide trunk is scoured and worn from the scratching of lion's claws and the pecking of Cape Glossy starlings, who live high up in its branches; their coats catching the sunlight as they chatter and call to each other. A few hop energetically along the branches, their beady eyes searching for insects, scurrying along. ...read more.

Their manes thick and shiny, the tips, tinted red from a carcass, caught as the sun rose and the fiery glow allowed enough light to spot an unfortunate impala; who had ventured out alone. One yawns. His teeth flash like the glimmer of a knife, his long fine whiskers twitch. As the African heat rises, the antelopes and Kudu no longer occupy the lion's train of thought. Until darkness sweeps in, these antelope will be safe from their predator, but their ears are still strained, their eyes flickering, waiting, watching, for a tell tale sign. They occasionally drop their guard and hurriedly bend down to eat the coarse grass, which is seldomly un-rooted from the dry, dusty soil. ...read more.

Come winter, when the monsoon rain hits the plains, and the wind rushes through the grass, the Fig tree is a canap�, and its strong branches provide a safe nesting place for the summer birds. The other trees stand naked, and while the winds continue, a swirl of leaves dance in the air, before being carried off along their way. Only the fig tree, with its evergreen leaves, can offer the animals a source of shelter. A pair of young giraffes canter un-steadily up to it, their long proud necks quickly lost in the dense mass of leaves, while their tails swish gently in the breeze. Their patchwork coats drip slowly onto the thirsty earth and their damp manes lie flat, like the battered savannah grass. ...read more.