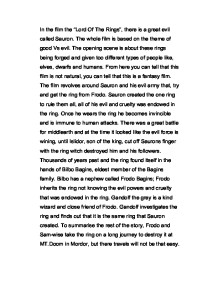 The film LOTR has multiple genres. It covers the genre of action, adventure and fantasy. The battles and wide landscape cover the action,

In the film the "Lord Of The Rings", there is a great evil called Sauron. The whole film is based on the theme of good Vs evil. The opening scene is about these rings being forged and given too different types of people like, elves, dwarfs and humans. From here you can tell that this film is not natural, you can tell that this is a fantasy film. The film revolves around Sauron and his evil army that, try and get the ring from Frodo. Sauron created the one ring to rule them all, all of his evil and cruelty was endowed in the ring. Once he wears the ring he becomes invincible and is immune to human attacks. There was a great battle for middlearth and at the time it looked like the evil force is wining, until Islidor, son of the king, cut off Saurons finger with the ring witch destroyed him and his followers. Thousands of years past and the ring found itself in the hands of Bilbo Bagins, eldest member of the Bagins family. Bilbo has a nephew called Frodo Bagins; Frodo inherits the ring not knowing the evil powers and cruelty that was endowed in the ring. ...read more.

This language suits the characters because they are ugly and disgusting which is like the language. The setting in LOTR are two completely different lands. In the shire the surroundings are full of woods and tress. Flowers and plants grow, there blue skies and sunlight which represents good and also the lights of heaven. Little cottages are all around with loveable people. There are lakes and streams flowing through the shire representing purity and life. The complete opposite is happening in mordor. There are no woods or trees, flowers don't grow and instead of water, lava flows through mordor. Spikes on the castles are sharp and rusty. Gloom covers the land, darkness in the skies. Creatures roam the land working for the dark lord Sauron. Peter Jackson sets these places like this to show how the people of shire are loveable peaceful and the creatures of mordor are mindless and evil. The setting in the shire represent the characters as kind loving people that care for one and other. The setting in mordor represent the characters as non-caring evil beings that only care for the dark lord and his ring. There are several different camera shots used in this film, these include, close up, birds eye view, low angle etc. ...read more.

The costumes have also made the audience think about weather the character is good or not. When we first see Aragon, also known as stryder, we see him in a dark hooded clothes, smoking a cigar showing a sign of fearlessness. His face is dark and from here we can make a judgement that this character is evil, however we see a little glimpse of light in his eyes which shows some goodness. We call this type of character an ambiguous one. Peter Jackson does this so that initially we, the audience, think that he is evil and no friend of the hobbits, but in actual fact he is good and helps the hobbits. The glimpse of light in his eyes also creates mystery because the audience asks themselves why would evil have bright white eyes. Special effects have been used to enhance the view. The staff of Gandolf fires bright blue balls. This represents the fantasy genre because there is lots of spells and magic in fantasy's, also the colour blue is shown as good. In my own opinion I think this film is great. I think this because it has lots of adventure and battles. This appeals to modern day audiences because of its realism to lots of fantasy books. The wide range of characters and areas, brilliant camera angles and costumes, great use of music makes this film a must see movie. ...read more.