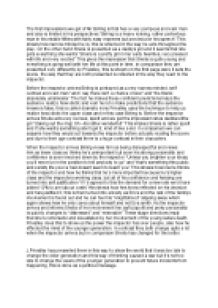 ﻿The first impressions we get of Mr Birling is that hes a very pompous and vain man and also is limited in his perspectives ?Birling is a heavy looking, rather portentous man in his middle fifties with fairly easy manners but provincial in his speech? This shows how narrow minded he is, this is reflected in the way he acts throughout the play. On the other hand Sheila is presented as a daddys girl and it seems that she gets everything she wants ?Sheila is a pretty girl in her early twenties, very pleased with life and very excited? This gives the impression that Sheila is quite young and everything is going well with her life at this point in time, in comparison they are ...read more.

Before the inspector arrives Sheila acts very curious, spoilt and we get the impression shes daddies little girl ?(taking out the ring) Oh ?its rather wonderful!? This implies Sheila is rather spoilt and if she wants something she?ll get it, kind of like a kid. In comparison we can assume how they would act towards the inspector before actually reading the scene and due to their age contrast there is a huge contrast in their characters. When the Inspector arrives Birling views him as being disrespectful and views him as lower class so thinks he?s unimportant but soon his strong personality and confidence is soon knocked down by the inspector ?Unless you brighten your ideas, you?ll never be in the position to tell anybody to go? ...read more.

As the inspector arrives and informs Sheila of her involvement her joyful,spoilt and perky personality is quickly changes to ?distressed? and ?miserable? These stage directions imply that she?s remorseful and devastated by her involvement of the young ladies death, Priestley does this to show us the power the inspector has over people, also how he effected the mind of the younger generation. In contrast they both change quite a lot when the inspector arrives but in comparison Sheila has changed for the better. J.Priestley has presented them in this way to show the world that it was too late to change the older generation and this way of thinking caused a war but it?s not too late to change the views of the younger generation to prevent future incidents from happening, this is done as a political message. ...read more.