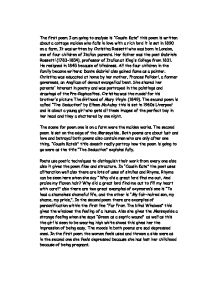 The first poem I am going to analyse is "Cousin Kate" this poem is written about a cottage maiden who falls in love with a rich lord it is set in 1890 on a farm. It was written by Christina Rossetti who was born in London, one of four children of Italian parents. Her father was the poet Gabriele Rossetti (1783-1854), professor of Italian at King's College from 1831. He resigned in 1845 because of blindness. All the four children in the family became writers; Dante Gabriel also gained fame as a painter. Christina was educated at home by her mother, Frances Polidori, a former governess, an Anglican of devout evangelical bent. She shared her parents' interest in poetry and was portrayed in the paintings and drawings of the Pre-Raphaelites. Christina was the model for his brother's picture The Girlhood of Mary Virgin (1849). The second poem is called "The Seduction" by Eileen McAuley this is set in 1960s Liverpool and is about a young girl who gets all these images of the perfect boy in her head and they a shattered by one night. ...read more.

In the second poem there are examples of personification within the first line "Far From The blind Windows" this gives the windows the feeling of a human. Also she gives the Merseyside a strange feeling when she says "Green as a septic wound" as well as this the girl is seen to be wearing high white shoes this gives her the impression of being easy. The moods in both poems are sad depressed ones. In the first poem the women feels used and thrown a side were as in the second one she feels depressed because she has lost her childhood because of being pregnant. The female characters in the poems are both weak but in the first poem she becomes strong at the end. The woman in "Cousin Kate" becomes pregnant and she feels she has one over on the lord because his new wife is infertile but again in this time sex before marriage was a sin so she was considered not moral. ...read more.

Mother hood is another in Cousin Kate the women feels that mother hood is her way of getting back at the lord were as in the "The Seduction" the girl feels ashamed by it. Both poems show betrayal in "Cousin Kate" the fact the lord did not marry her was betrayal and to make her pregnant was worse. In "The Seduction" the betrayal is by the boy who makes her pregnant and then leaves her. Society in both poems have changed but are much the same the fact the girls a pregnant is considered a sin in the 1890's "Call me an outcast thing." This is seen here. This is still frowned at in the 1960s "Than to have the neighbours whisper that 'you always looked the type' again seen here. Both poems are very similar, both contain images regarding lust and betrayal by men. The purpose of each poem is to show how lust and love a similar but difrent. In my opnion both poems are very similar in many ways and both show there motivations in good ways. ...read more.