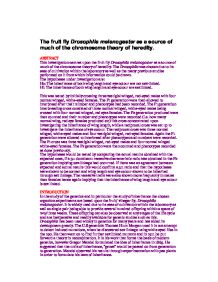 The fruit fly Drosophila melanogaster as a source of much of the chromosome theory of heredity.

This will show that wing length is sex-linked, while the reciprocal cross will be set up with the F1 generation being interbred in order to determine that eye colour is also sex linked due to the presence of another 3:1 ratio with the male again showing the recessive characteristic more frequently than the females. PLAN During his study of Drosophila, Thomas Hunt Morgan concluded that the genes for eye, colour and wing length have the allomorphs, red and white-eye and normal and vestigial wing length. He also concluded that red eye colour was dominant over white-eye and that the inheritance of eye colour in Drosophila was related to the sex of the parent flies. He concluded this by crossing a white- eyed male with a red-eyed female and producing equal numbers of F1 red eyed males and females. However, in breeding of these F1 flies produced red-eyed females, red-eyed males and white-eyed males but no white-eyed females. By the fact that the males showed the recessive characteristic more frequently than the females it suggested that the recessive white-eye allele was present on the X chromosome, hence being masked in the females yet expressed in the males due to sex linkage. [Biological Sciences 2, 1990] After reading through and being fascinated by Morgan's work, I wish to repeat his investigation into the inheritance of eye colour and confirm his results of eye colour being sex linked. ...read more.