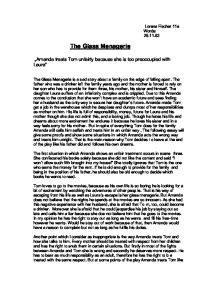 The Glass Menagerie - &quot;Amanda treats Tom unfairly because she is too preoccupied with Laura&quot;.

Lorena Fischer 11e Words: 25.11.03 The Glass Menagerie "Amanda treats Tom unfairly because she is too preoccupied with Laura" The Glass Menagerie is a sad story about a family on the edge of falling apart. The father who was a drinker left the family years ago and the mother is forced to rely on her son who has to provide for them three, his mother, his sister and himself. The daughter Laura suffers of an inferiority complex and is crippled. Due to this Amanda comes to the conclusion that she won�t have an academic future and sees finding her a husband as the only way to secure her daughter�s future. Amanda made Tom get a job in the warehouse which he despises and dumps most of her responsibilities as mother on him. His life is full of responsibility, money, future for Laura and his mother though she dos not admit this, and a boring job. Though he hates his life and dreams about more excitement he endures it because he loves his sister and in a way feels sorry for his mother. ...read more.

In my opinion he has the right to stay out as long as he wants and fill his free-time however he wants. Would he stay out of work because of that, then Amanda would have a reason to complain but not as long as he fulfils his duties. Another point which I consider as inappropriate is the way Amanda treats Tom and how she talks to him. Every mother should be treated with respect from her children and has the right to snub them in certain situations. But firstly in most of the fights between Amanda and Tom she is wrong and secondly he deserves more respect. He has to bear as much responsibility as an adult, therefore he has the right to be treated with the same respect. But at some points of the play Amanda treats Tom like a small child and what is even worse, she is nagging him consistently about everything from his table manner to his habit of smoking. ...read more.

Although Amanda has good intentions for her children she goes about everything in the wrong way. Some would say that she just wants the best for her children, which was most likely true, but she does not always know what the best is. She did love her children, but loving someone is not always enough. To be a good mother you need to tend to your child's every need, and believe in them 100%. Unfortunately Amanda possessed neither of these qualities. On the other hand we have to consider the fact that life was not easy for her. Her husband left her, she has to depend on her son, having the fear that he could leave every moment like his father did and her daughter is crippled and extremely shy, so it does not seem that she will have any gentlemancallers or any success in career. Those are also the reasons why she always tells from the past as if it had been perfect. Another fact that should not be ignored is that the play is written of Tom`s point of view. ...read more.