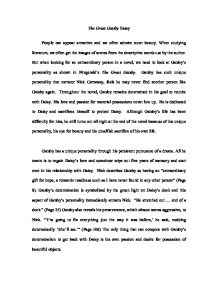 The Great Gatsby Essay People can appear attractive and we often admire outer beauty. When studying literature, we often get the images of scenes from the descriptive words use by the author. But when looking for an extraordinary person in a novel, we need to look at Gatsby's personality as shown in Fitzgerald's The Great Gatsby. Gatsby has such unique personality that narrator Nick Carraway, feels he may never find another person like Gatsby again. Throughout the novel, Gatsby remains determined in his goal to reunite with Daisy. His love and passion for material possessions never lets up. He is dedicated to Daisy and sacrifices himself to protect Daisy. Although Gatsby's life has been difficulty for him, he still turns out all right at the end of the novel because of his unique personality, his eye for beauty and his unselfish sacrifice of his own life. ...read more.

Even before Gatsby became rich, he developed an eye for beauty. He creates an ideal and beautiful image of himself as a member of the upper class. He then sets up a goal or a destiny for himself. As Nick says about Gatsby, "He must be about his father's business, the service of a vast, vulgar, and meretricious beauty." (Page 95) Gatsby surround himself with beauty. His mansion, his distinguished suits and his luxurious automobile all contribute to his desire for magnificence. As seen through the eyes of narrator Nick and others, "We went upstairs, through the period bedrooms swathed in rose and lavender silk and vivid with new flowers, through dressing rooms and poolrooms, and bath-rooms with sunken baths". (Page 88) Nick also makes references to Gatsby's cream colour car that is a truly beautiful possession. "He saw me looking at it in admiration...I'd seen it. ...read more.

Gatsby has unselfishly sacrificed his life to protect Daisy from retribution for Myrtle's death. In spite of the obstacles he faces in life, Gatsby turns out all right at the end of the novel. His unique personality, his appreciation of beautiful things and the surrender of his own life mark him as an extraordinary person. His unique personality drives him to persist in seeking Daisy's love. The irony is that Gatsby's love for beauty was the instrument in his death. His beautiful love Daisy was driving his beautiful car when it struck Myrtle Wilson. Gatsby's two most beautiful "possessions had combined to set off a chain of events that would end in his brutal murder at the hand of a vengeful husband. Gatsby's sacrifice proves that the title of Fitzgerald's novel is most appropriate. Gatsby's personality, eye for beauty and sacrifice make him a worthy recipient of the title "Great". ...read more.