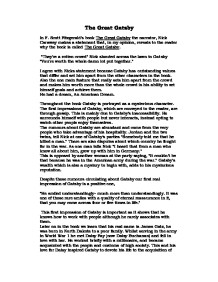 The Great Gatsby In F. Scott Fitzgerald's book The Great Gatsby the narrator, Nick Caraway makes a statement that, in my opinion, reveals to the reader why the book is called The Great Gatsby. "They're a rotten crowd" Nick shouted across the lawn to Gatsby "You're worth the whole damn lot put together." I agree with Nicks statement because Gatsby has outstanding values that differ and set him apart from the other characters in the book. Also the one main feature that really sets him apart from the crowd and makes him worth more than the whole crowd is his ability to set himself goals and achieve them. He had a dream, An American Dream. Throughout the book Gatsby is portrayed as a mysterious character. The first impressions of Gatsby, which are conveyed to the reader, are through gossip. This is mainly due to Gatsby's inaccessibility. He surrounds himself with people but never interacts, instead opting to watch other people enjoy themselves. The rumours about Gatsby are abundant and come from the very people who take advantage of his hospitality. ...read more.

She is immature as she doesn't seem to know how to act her age and uses her frail character as an excuse. Finally she is materialistic in that she married Tom Buchannan because he had money even though she promised Gatsby her heart. Jordan is much the same as Daisy as she too is selfish; she left a borrowed car out in the rain and then lied about it. She is a hypocrite; told Nick that she hates careless people when her best friends are the most careless people around. She is materialistic; always wanted to be in the wealthy class but is never accepted by that society. And in Nick's words "incurably dishonest", as she lies about nearly everything and most notably she cheated to win her first pro golf tournament. Also Daisy and Jordan represent the high-class/middle-high-class social group. Tom is much the same as Daisy and Jordan as he too is selfish; he had an affair with Myrtle whilst being married to Daisy. He is cruel; to Daisy all the time and he broke Myrtles nose because she disagreed with him. ...read more.

Although Gatsby is a criminal he is "likeably corrupt" and even though Nick says that he disapproved of Gatsby from "beginning to end" Nick builds quite a strong relationship between himself and Gatsby. Gatsby is also seen as a likeable character because he is not selfish and has that "drive" that keeps him going for he is always searching for more. For example in the beginning he wanted to obtain wealth, he achieved that and then he wanted more in the form of love; Daisy. Although in the end it is that drive that brings him down. Gatsby lived life to try and catch the attention of one woman, Daisy Fay, and he almost attained that goal but never quite reached it. When the dream was gone, he had nothing left to live for. In conclusion the American Dream that Gatsby had created for himself improved him as a person. Fitzgerald has created Gatsby as a more exciting and mysterious character than any in the story. Gatsby is the only character that had the ability to set himself goals and achieve them. Although this ability brought about his downfall it was the only thing that Gatsby had to live for. For these reasons, Gatsby is "worth the whole damn lot put together." By Patrick Fisher ...read more.