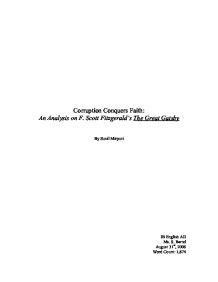 Corruption Conquers Faith: An Analysis on F. Scott Fitzgerald's The Great Gatsby By Sunil Mirpuri IB English AII Ms. S. Bartel August 31st, 2006 Word Count: 1,874 Outline Thesis: Fitzgerald, in his novel The Great Gatsby, portrays the corruption in the 20th century through his characters as well as the eyes of Dr. T.J. Eckleburg which lead the reader to believe that God, although He is referred to throughout the novel, is absent from the distorted society they live in. Body I. * Tom and Daisy embody certain morals and values which completely disregard God and religion. Tom Buchanon, for example, is racist, classist, and unfaithful. * "'Civilization's going to pieces,' broke out Tom violently. 'I've gotten to be a terrible pessimist about things. Have you read 'The Rise of the Coloured Empires' by this man Goddard?'"(p. 17). * "Tom's got some woman in New York." * Tom Buchanon, as well as Daisy, belongs to a "secret society" where only people of old, wealthy descent are admitted. * It is very odd to think that God is present in a society filled with corruption and immoral values where the wicked live prosperously. Body II * The Great Gatsby, as he is referred to in the book, is probably the most controversial character when analyzing God's influence in the 20th century society. ...read more.

This idea is emphasized, yet again, when, on page 19, Jordan Baker says, "Tom's got some woman in New York." The Holy Bible states that adultery is a sin, yet Tom Buchanon is cheating on his wife, Daisy, with Myrtle. Tom's classism is also a very immoral trait which he posses. Tom, being of a wealthy descent, does not like to associate himself with people of lesser status; this is the reason for his clash with Gatsby. Tom Buchanon, as well as Daisy, belongs to a "secret society" where only people of old, wealthy descent are admitted. If God were present in The Great Gatsby, a person like Tom Buchanon would not be as fortunate and wealthy as he is. Daisy, Tom's wife, embodies certain characteristics which are very similar to her husband. Like Tom, Daisy is classist and unfaithful. Daisy too belongs to the "secret society." It is the "secret society" she belongs to which does not allow her to be with someone like Gatsby, who is not at an adequate social status to be with her. Nevertheless, Daisy does not stop herself from cheating on her husband; she probably does this in order to get back at her husband, who is also having an affair. ...read more.

Standing behind him Michaelis saw with a shock that he was looking at the eyes of Doctor T.J. Eckleburg..." (p. 167). George Wilson's last words to his wife, Myrtle, before she dies are a reference to the billboard being God. Although Fitzgerald's intentions are note clear, the reader assumes that Wilson was conscience of the degradation of his society and he himself uses the metaphor of Eckleburg and the Valle of Ashes when arguing with his wife. Wilson is also aware of his wife cheating on him and, therefore, she too forms part of the corrupt society they live in. George Wilson was trying to demonstrate society's corruption to his wife; nevertheless, the one decent human being in the book ends up losing his wife. Moreover, Wilson probably stopped believing in God's existence in their society since he himself commits murder and then commits suicide; two significant sins mentioned in the Holy Bible. F. Scott Fitzgerald uses the eyes of T.J. Eckleburg and The Valley of Ashes to not only demonstrate God's absence from society, but to prove that God is completely dead in the twentieth century. God, as a concept, is an extremely intangible aspect when examined. God is an all knowing, superior being who is supposed to be ruling over and taking care of every single living human being. Yet in F. ...read more.