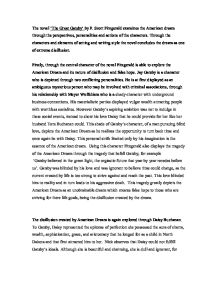 The novel 'The Great Gatsby' by F. Scott Fitzgerald examines the American dream through the perspectives, personalities and actions of the characters. Through the characters and elements of setting and writing style the novel concludes the dream as one of extreme disillusion. Firstly, through the central character of the novel Fitzgerald is able to explore the American Dream and its nature of disillusion and false hope. Jay Gatsby is a character who is depicted through two conflicting personalities. He is at first displayed as an ambiguous mysterious person who may be involved with criminal associations, through his relationship with Meyer Wolfshiem who is a shady character with underground business connections. His materialistic parties displayed vulgar wealth attracting people with worthless socialites. However Gatsby's aspiring ambition was not to indulge in these social events, instead to show his love Daisy that he could provide for her like her husband Tom Buchanan could. This shade of Gatsby's character, of a man pursuing blind love, depicts the American Dream as he realizes the opportunity to turn back time and once again be with Daisy. This personal strife limited only by his imagination is the essence of the American dream. ...read more.

We discover that Daisy does not truly love Gatsby, although she occasionally seems sincere, she is attracted by wealth, comfort and material luxury and possessions. Through Tom Buchanan we can again see the negative qualities and actions which corrupt and destroy the American Dream. While the dream is described as a strive to succeed in life and the journey encompassed within it, Tom is born into a very wealthy aristocratic family. Therefore it is no surprise that Tom is remarkably self-centered and desires to control and influence others. He leads a life opposite to that of the American dream as he cheats on Daisy with woman such as Myrtle, which appeared to be a material relationship. However, Nick observed tears flowing from Toms face and Tom also claimed that closing the apartment in New York was a painful experience for him. These occasions display that he does posses some human qualities. On the other hand, Tom's craving for power (in the form of knowledge) seeks to destroy Gatsby, by researching the past business life of Gatsby. This is in an effort to expose the truth to Daisy. ...read more.

The setting of the Valley of Ashes also greatly examines the destruction of the dream. This waste ground separates Long Island and New York, therefore many characters pass through. This valley is symbolic of the reality emptiness created by the pursuit of material prosperity and action. This emptiness is an unavoidable consequence of surrendering ones soul for material reasons. This immensely displays the American Dream as one of disillusion. The great extent of Disillusion concluded by the novel is evident in the last paragraphs of the novel where Nick Carraway reflects on the first thoughts that the Dutch sailors experienced. Nick describes these thoughts of a "fresh, green breast of the new world...greatest of all human dream..' This explores the idea that for ' a..transitory enchanted moment man must of have held his breath...face to face for the last time in history...to his capacity for wonder'. This idea of America being the last chance for man to implement great new initiatives, to create a better world is also lost as the moment experienced by the sailors is lost forever in the current of time and corruption of the dream. In summary, The Great Gatsby examines the American Dream through a variety of characters and settings which conclude to a large extent the disillusion created by society. ...read more.