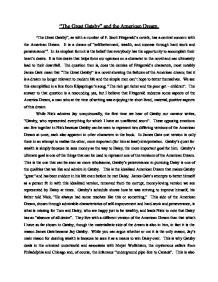 "The Great Gatsby" and the American Dream. "The Great Gatsby", as with a number of F. Scott Fitzgerald's novels, has a central concern with the American Dream. It is a dream of "self-betterment, wealth, and success through hard work and perseverance"1. In its simplest form it is the belief that everybody has the opportunity to accomplish their heart's desire. It is this desire that helps form our opinions on a character in the novel and can ultimately lead to their downfall. The question then is, does the demise of Fitzgerald's characters, most notably James Gatz mean that "The Great Gatsby" is a novel showing the failures of the American dream; that it is a dream no longer relevant to modern life and the simple men can't hope to better themselves. We see this exemplified in a line from Klipspringer's song; "The rich get richer and the poor get - children". The answer to that question is a resounding yes, but I believe that Fitzgerald redeems some aspects of the America Dream, a man who at the time of writing was enjoying the short lived, material, positive aspects of this dream. While Nick admires Jay unequivocally, the first time we hear of Gatsby our narrator writes, "Gatsby, who represented everything for which I have an unaffected scorn". ...read more.

Myrtle can't be blamed solely for her materialistic nature, she is partly a product of the post-war twenties in America, where the economic boom had made a lot of items available to the masses and advertising had fuelled this desire. Myrtle's husband George may also be criticised because he persistently asks Tom for the blue coup�. However George needs this car to survive; he is not like Tom who can bring a fleet of horses across the country, a fact that amazes Nick. George could be seen as the traditional American hero. He has worked hard every day of his life at building up his own business to earn money for the wife he loves but the supposed American Dream doesn't ring true for him. The difference between George and Jay is that jay has a far greater determination; he keeps on working to achieve his goals, no matter how slim his chances of success are. George resigns himself to defeat with his suicide. George doesn't enjoy the financial rewards that Tom found at birth, and his life seems to be devoid of any happiness. The biggest contributing factor to his downfall is Tom Buchanan, half of the couple that "smashed up things and creatures and then retreated back into their money or their vast carelessness". ...read more.

However, this novel's rich couple isn't destroyed like that in "The Beautiful and the Damned" because here they do worse, they destroy other people. However, we do sometimes see the Dream in a nostalgic light, partly because the author is an example of a life pursuing the American Dream. F. Scott Fitzgerald's success meant that he got his Daisy (his wife, Zelda)4, but Jay fails because of external influences. The American Dream is now common among the "flappers" but it is the one obsessed with material items, not the self-betterment dream we see in Gatsby. It's Jay's quest for love, not money that draws us to him and lets us virtually ignore his criminal connections. Jay dies still waiting for Daisy's call even though it is clear for all to see that hope should be lost. It is for his "extraordinary gift for hope" that we admire him and want to believe that the American Dream of anything being possible for anyone who works for it can still live, but society will not allow this to happen. Nick's final romantic vision of the original Dutch settlers, full of optimism for their new home, holds hope for the Dream, though America isn't a utopia anymore and men like Gatsby will fail because of the society they live in, not the dreams they have. ...read more.