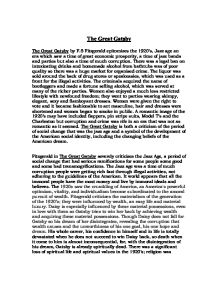 The Great Gatsby by F.S Fitzgerald epitomizes the 1920's.

The Great Gatsby The Great Gatsby by F.S Fitzgerald epitomizes the 1920's, Jazz age an era which saw a time of great economic prosperity, a time of jazz bands and parties but also a time of much corruption. There was a legal ban on intoxicating drinks and homemade alcohol from bathtubs was of poor quality so there was a huge market for organised crime. The liquor was sold around the back of drug stores or speakeasies, which was used as a front for the illegal activities. The criminals acquired the name of bootleggers and made a fortune selling alcohol, which was served at many of the richer parties. Women also enjoyed a much less restricted lifestyle with newfound freedom; they went to parties wearing skimpy, elegant, sexy and flamboyant dresses. Women were given the right to vote and it became fashionable to act masculine, hair and dresses were shortened and women began to smoke in public. A romantic image of the 1920's may have included flappers, pin stripe suits, Model T's and the Charleston but corruption and crime was rife in an era that was not as romantic as it seemed. The Great Gatsby is both a criticism of the period of social change that was the jazz age and a symbol of the development of the American social identity, including the changing beliefs of the American dream. Fitzgerald in The Great Gatsby severely criticizes the Jazz Age, a period of social change that had serious ramifications for some people some good and some bad transmogrifications. ...read more.

Rather, she illustrates her own monotony with life and gives the impression that a girl can have more pleasure if she is beautiful and simplistic. Daisy herself often tries to play such a part; she conforms to the conventional social standing of American femininity in the 1920's in order to evade such tension-filled subjects as her eternal love for Gatsby. The 1920's, the Jazz Age was a time of new music, Jazz, smooth jazz and rag music were key music forms of the time. With memorable songs such as the Charleston and Swing, Swing, Swing though this music revealed many of the discriminations in America. Poor, middle class girls would go to Upper class parties such as Gatsby's, in an attempt to break into the upper class. Into material wealth and social standings that they hadn't experienced in their lives before, some would even marry purely for money, such as Daisy who's 'love' was bought with a three hundred and fifty thousand dollar pearl necklace. The 1920's were a materialistic society where religion and individuality was cast aside for the amoral pursuit of wealth. The Great Gatsby is an exploration of the American dream as it exists in a corrupt period, and it is an attempt to determine that concealed boundary that divides the reality and illusion, as stated by Bewley. The Great Gatsby is essentially a social commentary on the failure of the American dream, from the point of view that American political ideals conflict with the actual social conditions that exist. ...read more.

In addition the book seems to scrutinize how many Americans squandered their spiritual purpose and intention as material success destroyed their spiritual goals. The lives of the Buchanan's, consequently, filled with material luxuries and extravagances, and void of intentions, represents this condition, the loss of spiritual identity. Daisy's comment on p. 113 is particularly indicative of this, 'What'll we do with ourselves this afternoon?' cried Daisy, 'and the day after that, and the next thirty years?' Daisy is bored; living in luxury with no purpose leaves her spiritually and emotionally empty. She drifts through live with no purpose, no obligations, a life free of stress, work and responsibility. Which in a sense is what makes us human, the pressure and stress of everyday life gives us a sense of involvement a sense of our own identity. It is the hopes and dreams that give our lives purpose and meaning without them we are nothing, like Daisy who is empty, all gesture over substance. The Great Gatsby provides a detail image of life in the Jazz age, although a very romantic time it was an era of much corruption and crime. Fitzgerald criticizes the social changes occurring in the 1920's, the values of the people and the development of the American cultural identity. Many people in America gave up optimism, vitality, and individualism for the amoral pursuit of wealth. Being able to recognize the difference between illusion and reality can mean life or death. Gatsby who bends his illusion so much that it eventually seems really, ends up being killed which is the resolution of the novel. ...read more.