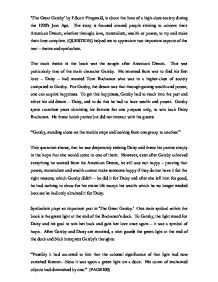 'The Great Gatsby' by F.Scott Fitzgerald.

'The Great Gatsby' by F.Scott Fitzgerald, is about the lives of a high-class society during the 1920's Jazz Age. The story is focused around people striving to achieve their American Dream, whether through; love, materialism, wealth or power, to try and make their lives complete. (QUESTION) helped me to appreciate two important aspects of the text - theme and symbolism. The main theme in the book was the sought after American Dream. This was particularly true of the main character Gatsby. He returned from war to find his first love - Daisy - had married Tom Buchanan who was in a higher-class of society compared to Gatsby. For Gatsby, the dream was that through gaining wealth and power, one can acquire happiness. To get this happiness, Gatsby had to reach into the past and relive his old dream - Daisy, and to do this he had to have wealth and power. ...read more.

Symbolism plays an important part in 'The Great Gatsby.' One main symbol within the book is the green light at the end of the Buchanan's dock. To Gatsby, the light stood for Daisy and his goal to win her back and gain her love once again - it was a symbol of hope. After Gatsby and Daisy are reunited, a mist guards the green light at the end of the dock and Nick interprets Gatsby's thoughts: "Possibly it had occurred to him that the colossal significance of that light had now vanished forever...Now it was again a green light on a dock. His count of enchanted objects had diminished by one." (PAGE100) This quotation shows that now Gatsby has Daisy, she is not as ideal as he had made her seem. ...read more.

shows that within this higher-class society everyone is a stranger to one another; however, due to reputation and popularity, they are all associated together as one group of 'friends.' Lastly, again Nick is narrating the important people at Gatsby's party; "Civet, Blackbuck, Beaver" this quotation confirms that only people who Gatsby sees as important and status building people are invited to his parties - he only wants to be associated with appropriate people for a man of his stature, which I think shows how alone he was in his bid to get Daisy and how much he was willing to sacrifice to get her. Overall, 'The Great Gatsby,' was an intriguing compilation of deceit, lust and love through the development of (QUESTION) in the areas of theme and symbolism. I found (QUESTION) affected my enjoyment of the book (QUESTION) and brought book to an interesting climax. ...read more.