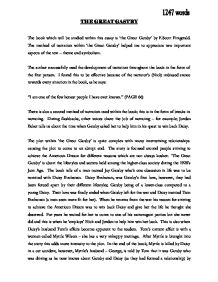 'The Great Gatsby' by F.Scott Fitzgerald.

THE GREAT GASTBY The book which will be studied within this essay is 'the Great Gatsby' by F.Scott Fitzgerald. The method of narration within 'the Great Gatsby' helped me to appreciate two important aspects of the text - theme and symbolism. The author successfully used the development of narration throughout the book in the form of the first person. I found this to be effective because of the narrator's (Nick) unbiased stance towards every situation in the book, as he says: "I am one of the few honest people I have ever known." (PAGE 66) There is also a second method of narration used within the book; this is in the form of breaks in narrating. During flashbacks, other voices chare the job of narrating - for example; Jordan Baker tells us about the time when Gatsby asked her to help him in his quest to win back Daisy. The plot within 'the Great Gatsby' is quite complex with many intertwining relationships causing the plot to come to an abrupt end. The story is focused around people striving to achieve the American Dream for different reasons which are not always kosher. ...read more.

He truly did come from nothing to being classed as one of the highest members of society. Also, America in the 1920s was shown as being the land of freedom and opportunities which, Gatsby proves can be true if you're prepared to do anything - even if it is illegal. However, Gatsby's case of achieving the American Dream was not entirely satisfying because he did not achieve it for the right reasons - he did it to get Daisy. Gatsby's life also highlighted the negative sides of the American Dream; one of these is the idea of being alone because of riches making you feel different. This is proved several times for Gatsby within the book. One example is the fact that at his luxurious parties, hundreds of people came - whether they had been invited or not. However, at Gatsby's funeral not one came accept his father, who Gatsby had not talked to for years; in fact, Gatsby said all his family were dead so the American Dream made Gatsby want to be alone. Another example of Gatsby's solidarity is when Nick sees Gatsby standing alone on his beach and says: "he gave a sudden intimation that he was content to be alone." ...read more.

I think Gatsby did this to show Tom he could compete with him to take Daisy and to show Daisy his lifestyle could please her - he was good enough for her now. A second example is when Nick - the Narrator, is describing the guests at one of Gatsby's extravagant parties: "Women who never know each other's names" this quotation shows that within this higher-class society everyone is strangers to one another, however, due to reputation and popularity they are all associated together as one group of 'friends.' Lastly, again Nick is narrating the important people at Gatsby's party; "Civet, Blackbuck, Beaver" this quotation confirms that only people who Gatsby sees as important and status building people are invited to his parties - he only wants to be associated with appropriate people for a man of his stature, which I think shows how alone he was in his bid to get Daisy and how much he was willing to sacrifice to get her. Overall, 'The Great Gatsby,' was an intriguing compilation of deceit, lust and love shown through the development of narrative skills in the areas of theme and symbolism. I found the narration within the book effected my enjoyment of it because as it was in the first person I felt the story seemed more personal and realistic; bringing the book to an interesting climax. ...read more.