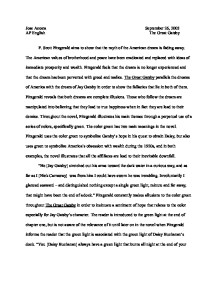 The Great Gatsby by F.Scott Fitzgerald.

Jose Acosta September 26, 2003 AP English The Great Gatsby F. Scott Fitzgerald aims to show that the myth of the American dream is fading away. The American values of brotherhood and peace have been eradicated and replaced with ideas of immediate prosperity and wealth. Fitzgerald feels that the dream is no longer experienced and that the dream has been perverted with greed and malice. The Great Gatsby parallels the dreams of America with the dream of Jay Gatsby in order to show the fallacies that lie in both of them. Fitzgerald reveals that both dreams are complete illusions. Those who follow the dream are manipulated into believing that they lead to true happiness when in fact they are lead to their demise. Throughout the novel, Fitzgerald illustrates his main themes through a perpetual use of a series of colors, specifically green. The color green has two main meanings in the novel. Fitzgerald uses the color green to symbolize Gatsby's hope in his quest to obtain Daisy, but also uses green to symbolize America's obsession with wealth during the 1920s, and in both examples, the novel illustrates that all the affiliates are lead to their inevitable downfall. "He [Jay Gatsby] stretched out his arms toward the dark water in a curious way, and as far as I [Nick Carraway] was from him I could have sworn he was trembling. ...read more.

Throughout the novel Fitzgerald uses many other images or symbols. At first, it may seem very basic, but when the symbol is closely studied, one may see the deeper meaning found within it. Fitzgerald uses these symbols to make a point across to the reader. He then uses this point and converts it into a deeper meaning, into a myth about America. The green light mentioned in the novel clearly represents and is a prime example of this. The color green not only represents Gatsby's dream but also the dream of America that insinuated the possibility of prosperity for all Americans. The American Dream originated in the early days of the American settlement, with the mostly poor immigrants searching for opportunities. It was first manifested in the Declaration of Independence, which describes an attitude of hope. The Declaration of Independence states that "all man are created equal and that they are endowed with certain unalienable rights, among which are life, liberty and pursuit of happiness". In The Great Gatsby, the color green symbolizes for importance of money during this era, not only in the life Gatsby where his motive is to win Daisy but also in the lives of all of Americans. Gatsby's home erected only to buttress the identity of Gatsby as a successful businessman is covered with "raw ivy" and sits on "more than forty acres of [green] lawn and garden." ...read more.