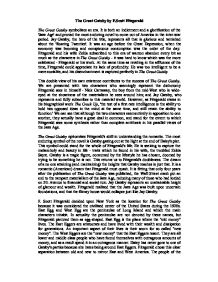 The Great Gatsby by F.Scott Fitzgerald

The Great Gatsby by F.Scott Fitzgerald The Great Gatsby symbolizes an era. It is both an indictment and a glorification of the 'Jazz Age' and proved the most enduring novel to come out of America in the inter-war period. Jay Gatsby, the hero of the title, represents all that is glorious and tarnished about the 'Roaring Twenties'. It was an age before the Great Depression, when the economy was booming and conspicuous consumption was the order of the day. Fitzgerald and his wife Zelda subscribed to this era of wanton abandon every bit as much as the characters in The Great Gatsby - it was hard to know which was the more celebrated - Fitzgerald or his work. At the same time as reveling in the affluence of the time, Fitzgerald could appreciate its lack of profundity. He was too intelligent to be a mere socialite, and his disenchantment is captured perfectly in The Great Gatsby This double view of his own existence contributes to the success of The Great Gatsby. ...read more.

dream that Fitzgerald must quash. It is fitting that only four years after the publication of The Great Gatsby was published, the Wall Street crash put an end to the rampant materialism of the Jazz Age, reducing many of those who had lorded on 5th Avenue to financial and social ruin. Jay Gatsby represents an unattainable height of glamour and wealth. Fitzgerald realized that the Jazz Age was built upon uncertain foundations, and that the flimsy house would collapse just like Jay Gatsby. F. Scott Fitzgerald decided upon New York as the location for The Great Gatsby because it was considered the civilized center of the United States during the 1920s. East Egg and West Egg are the peninsulae of Long Island and which the main characters inhabit. In actuality the peninsulae are not denoted by these names, but Fitzgerald pictured them as egg-shaped. East Egg is the place where the "old money" lives. ...read more.

The valley represents modern society and the destruction that it causes. The ashes are a byproduct of the trains and represent a poisoning of the American landscape. The valley is essentially a dumping ground for modern, industrial, toxic waste. Nick Carraway relocates from the West, a place where moral values are upheld, to the East, a place of meretricious values of wealth and social affairs. Moving to New York City, Nick lands a small job in the stocks and bonds business. After living in New York, people sacrifice their moral standards and turn to corruption. For example, Nick becomes more dishonest than he was when he first left for the big city. Furthermore, Nick, Gatsby, Tom, Daisy, and Jordan all migrated from the west to the east, and in doing so, they desert most of the moral values that they had acquired while living in the West. Making a permanent move to the East symbolizes the complete loss of moral esteem in Tom, Daisy, and Jordan; however, Nick, who will regain the moral standard that he had once lost while living in the East, moves back to the Midwest after Gatsby's death. ...read more.

The writer provides an insightful study of Ã¢â‚¬ËœThe Great GatsbyÃ¢â‚¬â„¢ within its social and biographical context. Depending on exam boards, discussing these issues can be essential to gaining higher marks, and the writerÃ¢â‚¬â„¢s examples of how the exuberant, hedonistic culture ...

The writer provides an insightful study of Ã¢â‚¬ËœThe Great GatsbyÃ¢â‚¬â„¢ within its social and biographical context. Depending on exam boards, discussing these issues can be essential to gaining higher marks, and the writerÃ¢â‚¬â„¢s examples of how the exuberant, hedonistic culture of the 1920s is represented by Fitzgerald, as well as the influence of FitzgeraldÃ¢â‚¬â„¢s personal experience upon the bookÃ¢â‚¬â„¢s characters and events, reveal originality and a perceptive awareness of the social commentary behind the text.

The writerÃ¢â‚¬â„¢s analysis is generally excellent, exploring in depth the themes of the text. The contrast between East and West of America is adeptly interpreted, and the writer clearly recognises the importance of setting and context in conveying the themes and social commentary of the text. The author could perhaps improve the essay further by examining in greater depth the significance of each of the bookÃ¢â‚¬â„¢s principal locations, and their power to affect behaviour and subvert identity (note for example MyrtleÃ¢â‚¬â„¢s transformation between the Valley of Ashes and New York City, or perhaps the guests acting Ã¢â‚¬Å“according to the rules of behaviour associated with an amusement parkÃ¢â‚¬Â once having arrived at GatsbyÃ¢â‚¬â„¢s house in West Egg).
A more significant criticism however Ã¢â‚¬â€œ and indeed the reason that this otherwise superb essay didnÃ¢â‚¬â„¢t achieve a 5-star rating Ã¢â‚¬â€œ is the writerÃ¢â‚¬â„¢s complete lack of detailed textual analysis. Though a great piece in itself, in the context of GCSE or A Level mark schemes it is ESSENTIAL to choose quotations from the text to support your arguments and analyse how the authorÃ¢â‚¬â„¢s use of language and literary techniques helps to convey deeper meaning. Due to the lack of detailed textual analysis this essay would likely be unable to score above a C/D grade, despite the generally high quality of the piece. The writer could have hugely improved their mark by including some quotations from the book which support the otherwise excellent points made.

The quality of written communication is mostly excellent. The essay is fluently structured, utilises advanced and appropriate vocabulary, and makes no errors of spelling grammar or punctuation. Due to the aforementioned lack of textual analysis, technical terms are underused. An appropriate mention of FitzgeraldÃ¢â‚¬â„¢s use of colour symbolism, proleptic irony or even of simple metaphor would have improved the writerÃ¢â‚¬â„¢s argument noticeably, especially in terms of the GCSE or A Level mark scheme. Some slightly inelegant syntactical choices only detract slightly from the writerÃ¢â‚¬â„¢s arguments.