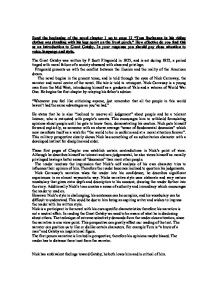 Read the beginning of the novel chapter 1 up to page 12 "Tom Buchanan in his riding clothes was standing with his legs apart on the front porch." How effective do you find this as an introduction to Great Gatsby. In your response you should pay close attention to voice, language and style. The Great Gatsby was written by F Scott Fitzgerald in 1925, and is set during 1922, a period tinged with moral failure of a society obsessed with class and privilege. Fitzgerald presents us with the conflict between the illusion and the reality of the American dream. The novel begins in the present tense, and is told through the eyes of Nick Carraway, the narrator and moral centre of the novel. His tale is told in retrospect. Nick Carraway is a young man from the Mid West, introducing himself as a graduate of Yale and a veteran of World War One. He begins the first chapter by relaying his father's advice: "Whenever you feel like criticizing anyone, just remember that all the people in this world haven't had the same advantages as you've had." He states that he is also "inclined to reserve all judgement" about people and be a tolerant listener; who is entrusted with people's secrets. This encourages him to withhold formulating opinions about people until he gets to know them, demonstrating his caution. ...read more.

; Where he is able to reflect upon the past few years. Nick declares, with irony that in going East he briefly became a 'guide, a path finder, an original settler'. Nick also introduces us to his family who have been "prominent, well-to-do people"; claiming descent from the dukes of Buccleuch, a wealthy and humble "clan". That has maintained family tradition by remaining in the "wholesale hardware business". Although it is ironic that the Carraway's wealth is based upon cheating similar to how Gatsby obtained his wealth. As if the American dream can only be successful through corruption. Nick however decides to join the bond business and has the support of his father who agrees to finance him for a year. Nick appears to the reader as a person that wants change and has a new hope of building his own future without being too dependent on his father or the family business. This reflects the American dream of new hope and change. The American dream arose in the colonial period and developed in the nineteenth century - was based on the assumption that each person, no matter what there origins, could succeed in life on the basis of his or her own skill and effort. The dream was embodied in the ideal of the self made-man. ...read more.

This appears to be an honest perception of tom that supports our first view of when we meet him (p.12). Fitzgerald reveals a very potent man standing in riding cloths with his legs apart on his front porch. He likes his power, and like the emperor of eastern kingdoms, he expects the obedience of his subjects. It is not only through character status that wealth is symbolised but also through the colour such as "gold". Towards the end of page 9 the reader is given a sense of time and a positive idea of how the modern world is progressing, through the metaphor of "growing trees" and the "burst of leaves" creating new life that has potential just like the American Dream. "Fast movies" (p.9) and the "telephone" (p.12) symbolise the Twentieth -century technological environment. The growth of cinemas, cars, boats is recognised by the twenties as a decade of mass media and mass production in America. The novel raises the issue of individual worth in such a context. In contrast to this materialistic world, Daisy's name evokes a delicate flower. The irony here is that her life is conducted in an entirely manufactured environment, distant from the natural world. The key structure of the chapter is the combination of first person narrative and the gradual revelation of the past. ...read more.