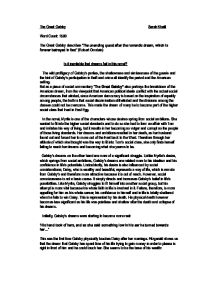 The Great Gatsby describes &quot;The unending quest after the romantic dream, which is forever betrayed in fact&quot; (Robert Omstein) - Is it inevitable that dreams fail in this novel?

The Great Gatsby Sarah Khalil Word Count: 1580 The Great Gatsby describes "The unending quest after the romantic dream, which is forever betrayed in fact" (Robert Omstein) Is it inevitable that dreams fail in this novel? The wild profligacy of Gatsby's parties, the shallowness and aimlessness of the guests and the hint of Gatsby's participation in theft and crime all identify the period and the American setting. But as a piece of social commentary "The Great Gatsby" also portrays the breakdown of the American dream, from the viewpoint that American political ideals conflict with the actual social circumstances that existed, since American democracy is based on the inspiration of equality among people, the truth is that social discrimination still existed and the divisions among the classes could not be overcome. This made the dream of many be to become part of the higher social class that lived in East Egg. In the novel, Myrtle is one of the characters whose desires spring from social ambitions. She wanted to fit into the higher social standards and to do so she had to form an affair with Tom and imitates his way of living, but it results in her becoming as vulgar and corrupt as the people of those living standards. ...read more.

His dreams help him make life worth living. This is also proven after the collapse of his dreams, when he takes the blame for killing Myrtle even though it was Daisy's fault but he sees not purpose worth living as he has lost Daisy. Fitzgerald created the whole crisis of Gatsby's identity to help him find himself through his ambitions and dreams. Gatsby's original name was Jay, but changed after he realised that he has a purpose in his life and to achieve he had to change his identity. He was planning to possibly use Daisy as a parasitic in order to gain social standards and status and become someone like Tom. However he realises his ambition could not be met as Daisy chose Tom over him. However he does not give up and keeps his hopes and dreams of getting Daisy back. Fitzgerald claims to us that dreams stop becoming dreams if they become real. When Gatsby's dreams become tangible, they lose their meaning and value of being a dream. When he kisses Daisy, Fitzgerald writes: "At his lips' touched se blossomed for him like a flower and the incarnation was complete" This suggests that dreams should stay dreams because as soon as they become real they lose their purpose. ...read more.

Fitzgerald refers to aging through Nick who becomes thirty during the novel. This implies that time passes by rapidly without realisation. Gatsby intended to stay young until he forms his identity and gets Daisy back. His death could possibly represent the death of his dreams and ambitions. As soon as he realises he has lost Daisy and his dreams have collapsed, he becomes willing to take responsibility of the death of Myrtle. This could possibly be because he still loves Daisy and does not want her to get into the problem or it could possibly suggest that he does not care any more about his situation and is willing to take the blame as it was his car. It is clear that Tom was the winner and Gatsby was the defeated, as Tom managed to keep Daisy, whilst Gatsby lost her. The main reason he lost her was because of his under-class position. When Gatsby's becomes part of the upper class, his dreams collapse, therefore, it seems to be important to be part of the under-class to sustain a dream. It seems to be inevitable that dreams fail in this novel, as when the dreams and ambitions become tangible to the characters, they lose the meaning of being a dream. However, it seems to be vital in this novel to have a dream in order to make life worth living. ...read more.