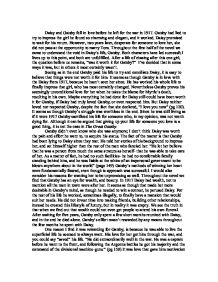 Daisy and Gatsby fell in love before he left for the war in 1917. Gatsby had lied to try to impress the girl he found so charming and elegant, and it worked. Daisy promised to wait for his return. However, two years later, desperate for someone to love her, she did not pass at the opportunity to marry Tom. Throughout the first half of the novel we came to understand the void in Daisy's life, Gatsby. Both characters have led successful lives up to this point, and both are unfulfilled. After a life of chasing after this one girl, the question before us remains, "was it worth it for Gatsby?" I've decided that in some ways it was, but in others it most certainly wasn't. Seeing as in the end Gatsby paid his life to try and conciliate Daisy, it is easy to believe that things were not worth it for him. It seems as though Gatsby is in love with the Daisy from 1917, because he hasn't seen her since. ...read more.

I would also consider his reasons for wanting her to be unpromising as well. Throughout the novel we find that Gatsby has an eye for wealth, and beauty. In 1917 Daisy had wealth, not to mention all the men in town were after her. It seems as though that made her more desirable in Gatsby's mind, as though he needed to win a contest, he perused Daisy. For the rest of his life he worked, sometimes illegally, to finally have a mansion that would suit her needs. He did not invest time into making friends, building other relationships, instead he created this lifestyle of luxury, but in reality it was empty. We see the truth in that when we find out that wealth could not even get people to attend his own funeral. After waiting for five years, Gatsby only spent a few short months reunited with Daisy, and in the end he died alone. Gatsby's effort wasn't rewarded by any means throughout the few months he spent with Daisy. One reason I find it was rewarding for Gatsby, is because he was able to live the superficial life he seemed to always want. ...read more.

Now on the flip side, there were some strong arguments made that say that it was all worth it for Jay Gatsby. Johannes states a few good reasons why things were worth it for Gatsby. "Because of this love he fought amazingly in the war to get back to her, because of this love he became rich and famous and because of this love he lived the life he had. If all this is not rewarding enough than we still shouldn't forget that Daisy was the reason he became friends with Nick and Jordan and so gained two good friends, which can't be bought with money." Hilary makes an interesting point by saying that in order to sacrifice your life for someone, you must have true love. "Gatsby was willing to make any sacrifice for Daisy, and he paid the ultimate price to ensure she would be safe and happy. That is true love, something Gatsby had to work for and was (although hastily) rewarded for." As you can see there are some good arguments put up on both sides, and this is really an opinion reflection topic. ...read more.