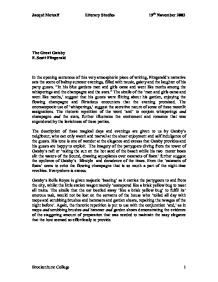 The Great Gatsby F. Scott Fitzgerald In the opening sentences of this very atmospheric piece of writing, Fitzgerald's narrative sets the scene of balmy summer evenings, filled with music, gaiety and the laughter of his party guests. "In his blue gardens men and girls came and went like moths among the whisperings and the champagne and the stars." The simile of the 'men and girls came and went like moths,' suggest that his guests were flitting about his garden, enjoying the flowing champagne and flirtatious encounters that the evening promised. The onomatopoeic use of 'whisperings,' suggest the secretive nature of some of these moonlit assignations. The rhetoric repetition of the word 'and' to conjoin whisperings and champagne and the stars, further illustrates the excitement and romance that was engendered by the lavishness of these parties. The description of these magical days and evenings are given to us by Gatsby's neighbour, who can only watch and marvel at the sheer enjoyment and self indulgence of the guests. ...read more.

Again, the rhetoric repetition is put to use with the conjunction 'and,' as in mops and scrubbing brushes and hammer and garden shears demonstrating the evidence of the staggering amount of preparation that was needed to maintain the easy elegance that the host seemed so effortlessly to provide. The diction of the neighbour's commentary in describing the displays of wealth and excess is both clipped and hurried, his words tumbling out, almost tripping over himself in his excitement to relate the scene. The rhythm of the prose is fastly paced; ensuring that the writer's intention to involve us in the gaiety and energy of the atmosphere is achieved. In the neighbour's minutiae he even thrills to tell us of the 'machine in the kitchen which could extract the juice of two hundred oranges in half an hour if a little button was pressed two hundred times by a butler's thumb'. ...read more.

The air is 'alive with chatter and laughter. Casual innuendo and 'introductions forgotten on the spot'. These observations set the careless tone of the evening. In the final paragraph the neighbour observes that 'the lights grow brighter as the earth lurches away from the sun, and the orchestra is playing 'yellow cocktail music' a metaphor for the evening to begin in earnest as the night grows darker and the social intimacy follows. With the use of short, breathless, phrases, Fitzgerald heightens the excitement and intensity of the mood. 'The groups change more swiftly, swell with new arrivals, dissolve and form in the same breath.' The last sentence of the piece encapsulates the spirit of the text. 'The group, excited with triumph, glide on through the sea-change of faces and voices and colour under the constantly changing light'. Fitzgerald, through the eyes and consciousness of Gatsby's neighbour, has captured the essence of the 'Roaring Twenties' with the extravagance, gaiety and ephemeral mood of the times. 822 Words Jacqui Metcalf Literary Studies 19th November 2003 2 Brockenhurst College ...read more.