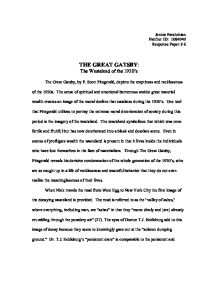 The great Gatsby:The Wasteland of the 1920's

Jennie Farshchian Panther ID: 1084949 Response Paper # 6 THE GREAT GATSBY: The Wasteland of the 1920's The Great Gatsby, by F. Scott Fitzgerald, depicts the emptiness and recklessness of the 1920s. The sense of spiritual and emotional barrenness amidst great material wealth creates an image of the moral decline that escalates during the 1920's. One tool that Fitzgerald utilizes to portray the extreme moral deterioration of society during this period is the imagery of the wasteland. The wasteland symbolizes that which was once fertile and fruitful but has now deteriorated into a bleak and desolate scene. Even in scenes of profligate wealth the wasteland is present in that it lives inside the individuals who have lost themselves in the face of materialism. ...read more.

When Tom and Nick stop in the "valley of ashes" to pick up Myrtle, Tom describes it as "a terrible place" because it annoys him to have to even briefly face such extreme poverty. This area that glares of poverty lies not far beyond Tom's area of great wealth. This is perhaps to demonstrate the moral corruption of the wealthy to be able to live so close to deprivation yet feel so little empathy towards it. To contrast this scene of the wasteland and demonstrate the extremes that exist between wealth and poverty, the next chapter depicts the hedonistic decadence that permeates Gatsby's parties. There is evidence of wasteful materialism everywhere and Fitzgerald implements a great amount of detail to describe this so that the excessiveness of the situation will not be underestimated. ...read more.

The superficiality of the guests reveals that no amount of material wealth can mask the emptiness that lies beneath the surface. In the end it is Nick who prevails because although he is constantly surrounded by money, he never attaches himself to the idea of material wealth. He recognizes the money-driven corruption that pervades the lives of Easterners, and he ultimately renders himself "subtly unadaptable to Eastern life" (184). This conclusion emphasizes Fitzgerald's message that wealth and happiness are two separate entities and that neither is a means or an end to the other because the only thing that the excessive consumerism of the 1920's did was to leave a whole generation spiritually desolate and empty. ...read more.