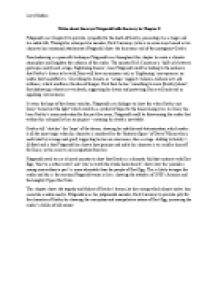 The Great Gatsby. Write about the ways Fitzgerald tells the story in Chapter 8

﻿Lucy Maddix Write about the ways Fitzgerald tells the story in Chapter 8 Fitzgerald uses Chapter 8 to provoke sympathy for the death of Gatsby, presenting it as a tragic end to a noble life. Through his retrospective narrator, Nick Carraway, (who is in some ways biased as his character has emotional attachments) Fitzgerald shows the disastrous end of the protagonist Gatsby. Foreshadowing is a powerful technique Fitzgerald uses throughout this chapter to create a climatic atmosphere and heighten the catharsis of the reader. ...read more.

It seems the hope of the dream vanishes, Fitzgerald uses dialogue to show this when Gatsby says Daisy ?turned out the light? which could be a symbol of hope for the dream being over. As Daisy has been Gatsby?s main motivation for the past five years, Fitzgerald could be forewarning the reader that without his sole goal he has no purpose ? meaning his death is inevitable. Gatsby still ?clutches? the ?hope? of the dream, showing his nobility and determination, which makes it all the more tragic when his character is murdered by the ?fantastic figure? of Owen Wilson who is motivated by revenge and grief, suggesting he has no conscience, like a savage. ...read more.

This is likely to anger the reader and this is the reaction Fitzgerald wants as he is showing the attitudes of 1920?s America and the haughty Upper East Side. This chapter shows the tragedy and failure of Gatsby?s dream; he dies trying which almost makes him seem like a noble martyr. Fitzgerald uses his judgmental narrator, Nick Carraway to provoke pity for the character of Gatsby by showing the corruption and manipulative nature of East Egg, increasing the reader?s dislike of old money. ...read more.