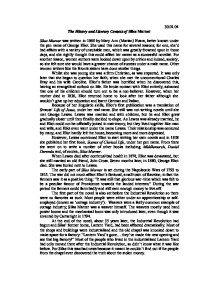 The History and Literary Context of Silas Marner.

30.01.04 The History and Literary Context of Silas Marner Silas Marner was written in 1860 by Mary Ann (Marian) Evans, better known under the pen name of George Eliot. She used this name for several reasons; for one, she'd had affairs with a variety of unsuitable men, which was greatly frowned upon in those days, and she rightly thought this could affect her career as a successful novelist. For another reason, women authors were looked down upon by critics and indeed, society, so she felt sure she would have a greater chance of success under a male name. Other women writers like the Bront� sisters have done similar things. Whilst she was young she was a firm Christian, as was expected. It was only later that she began to question her faith, when she met the unconventional Charles Bray and his wife Caroline. Eliot's father was horrified when he discovered this, having an evangelical outlook on life. He broke contact with Eliot entirely, ashamed that one of his children should turn out to be a non-believer. However, when her mother died in 1836, Eliot returned home to look after her father although she wouldn't give up her education and learnt German and Italian. Because of her linguistic skills, Eliot's first publication was a translation of Strauss' Life of Jesus, under her real name. ...read more.

desire and satisfaction that had no relation to any other being." The only person he had any kind of contact with was one of his customers, Dolly Winthrop. In fact, many of the inhabitants of Raveloe saw weaving as some sort of Devil-aided profession, as indispensable as it was. Really, they only feared strangers because they knew nothing about them: "The world outside their own direct experience was a region of vagueness and mystery." The squire was the most important person in most towns and villages at the time. Squire Cass was Raveloe's squire and he lived in the grand Red House with his two sons Godfrey and Dunstan. The Red House was used for social gatherings, such as parties. Squire Cass also had tenants. The doctor, vicar and magistrate fell just under the squire in importance, all being essential for village life; the doctor for health, the vicar for religion and the magistrate for law. In Silas Marner Dr Kimble is mentioned quite often, which could be to emphasise that he was an important part of Raveloe. The lowest tier of the hierarchy was, of course, the working class, including Silas Marner. Whereas the Squire's house was a large, handsome building, embellished with a grand flight of stone steps and with the high stables behind it, opposite the church, Silas' house at the edge of the stone pits was a tiny, ramshackle affair, probably with only two or three rooms. ...read more.

Dr Kimble did treat most people, but shows the ignorance of the age by suggesting to Silas that he smoke in order to cure his cough. However, Silas had his own medicines which he made from herbs and flowers, a skill inherited from his mother. He cured Sally Oates using his herbal remedies "and made her sleep like a baby, when her heart had been beating enough to burst her body..." Unfortunately for Silas, the news of his skills spread quickly, and soon many people from all over Raveloe were coming to Silas to have him cure their rheumatism and other ailments, adding more darkly "that if you could only speak the devil fair enough, he [Silas] might save you the cost of the doctor." So witchcraft was still in people's minds. Drugs were also used in that time, and Godfrey Cass's wife, Molly, was addicted to opium, the drug which finally killed her. The life that George Eliot was depicting in Silas Marner was one in which poverty and wealth lived side by side, and people accepted that that was how things were. Religion was very important to all, whether it was non-conformist or Anglican. By the time George Eliot wrote Silas Marner she had lost her Christian faith, and this could have inspired her to write about somebody who also loses their faith although, unlike George Eliot, Silas regains his. ...read more.