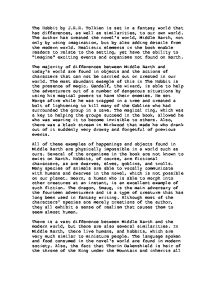 The Hobbit by J.R.R. Tolkien is set in a fantasy world that has differences, as well as similarities, to our own world. The author has created the novel's world, Middle Earth, not only by using imagination, but by also adding details from the modern world. Realistic elements in the book enable readers to relate to the setting, yet have the ability to "imagine" exciting events and organisms not found on Earth. The majority of differences between Middle Earth and today's world are found in objects and the actions of characters that can not be carried out or created in our world. The most abundant example of this in The Hobbit is the presence of magic. Gandalf, the wizard, is able to help the adventurers out of a number of dangerous situations by using his magical powers to harm their enemies. ...read more.

The dragon, Smaug, is the main adversary of the fourteen adventurers and is a type of creature that has long been used in fantasy writing. Although most of the characters' species are merely creations of the author, they all exhibit a sense of realism that causes them to seem almost human. There is a vast difference between Middle Earth and the modern world, but there are also several similarities. In Middle Earth, there live humans, and hobbits, which are very much similar to miniature people. The language spoken and food consumed in the novel's world are found in modern society. Also, the fact that Thorin Oakenshield is heir of the throne of the King under the Mountain and inherits all of the riches of the kingdom is like the parliamentary system of England. The environment and terrain the group passes through on their adventure is primarily the same as lands unchanged by humans and surrounded by nature appear today. ...read more.

When the group of fourteen was staying with Beorn to rest, he gave them suggestions and information about the journey that lie ahead of them. He informed them about a black stream out of which they should never drink, no matter how thirsty they may be, for it would put them to sleep for days. If they had not listened to his words, their adventure would have ended, as they all would have consumed the water and probably been captured by enemies. Their experiences teach us that it is wise to listen to those with more knowledge than us, as it is likely that they have been in our position before and have experience. If we shun them and take their words as mere bragging, then we are missing an opportunity to learn and will probably make a mistake that we could have prevented. Although The Hobbit is fictional, one can learn much about reality in the morals it contains. ...read more.