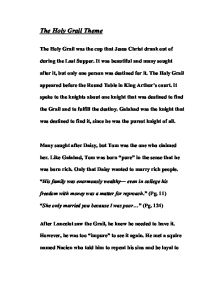 The Holy Grail Theme The Holy Grail was the cup that Jesus Christ drank out of during the Last Supper. It was beautiful and many sought after it, but only one person was destined for it. The Holy Grail appeared before the Round Table in King Arthur's court. It spoke to the knights about one knight that was destined to find the Grail and to fulfill the destiny. Galahad was the knight that was destined to find it, since he was the purest knight of all. Many sought after Daisy, but Tom was the one who claimed her. Like Galahad, Tom was born "pure" in the sense that he was born rich. ...read more.

He had changed it at the age of seventeen and at the specific moment that witnessed the beginning of his career when he saw Dan Cody's yacht drop anchor over the most insidious flat on Lake Superior." (Pg. 94) "He (Gatsby) and this Wolfshiem bought up a lot of side-street drug-stores here and in Chicago and sold grain alcohol over the counter." (Pg 127) Lancelot went to Corbenic, where the Grail was kept. He was granted only a glimpse of the Grail. Although he reinvented himself, the Grail was granted to Galahad and Lancelot had no chance. Even though Gatsby reinvented himself, Daisy never really cared for him. She did not even to go his funeral. ...read more.

Guinevere and Lancelot fell in love. He wore the clothes of her favourite colours and did whatever to please her. Gatsby did everything little thing to make Daisy happy. He wore the colour of money and his house reflected everything that was of Daisy. "An hour later the front door opened nervously, and Gatsby, in a white flannel suit, silver shirt, and gold-coloured tie, hurried in." (Pg 81) "We went upstairs, through period bedrooms swathed in rose and lavender silk and vivid with new flowers, through dressing rooms and poolrooms, and bath-rooms with sunken baths." (Pg 88) Nevertheless, King Arthur found out about Lancelot and Guinevere, and was upset. Tom found out about Gatsby and Daisy and he was angry. " 'I want to know what Mr. Gatsby has to tell me.' 'Your wife doesn't love you,' said Gatsby, 'She's never loved you. She loves me.'" (Pg 124) ...read more.