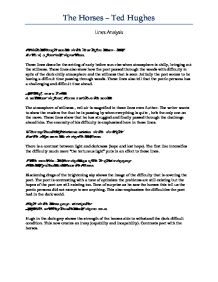 Lines Analysis I climbed through woods in the hour before dawn - dark Evil air, a frost making stillness. These lines describe the setting of early before sun-rise when atmosphere is chilly, bringing out the stillness. These lines also show how the poet passed through the woods with difficulty in spite of the dark chilly atmosphere and the stillness that is seen .Initially the poet seems to be having a difficult time passing through woods. These lines also tell that the poetic persona has a challenging and difficult time ahead. Not a leaf , now a bird A world cast in frost , I came out above the wood. ...read more.

There is a contrast between light and darkness (hope and lost hope). The first line intensifies the difficulty much more "the torturous light" puts in an effect to these lines. Till the moor line -blackening dregs of the brightening grey Halved sky ahead And I saw the Horses. Blackening dregs of the brightening sky shows the image of the difficulty that is covering the poet. The poet is contrasting with a tone of optimism the problems are still existing but the hopes of the poet are still existing too. Tone of surprise as he saw the horses this tell us the poetic persona did not except to see anything. ...read more.

The horse are the only ones who have adapted to this difficult dark atmosphere. The silence of the horses appreciates the tendency of the animals to adapt to the environment. I passed no one snorted or jerked its head Grey silent fragments Of the grey silent world These lines say that the horses are a part of the grey atmosphere and also because they are quiet with the atmosphere patience is signified in these lines "I passed : No one snorted or jerked its head". "Of a grey silent world " shows a cast world it also gives a tone of appreciation to the horses, the poet also emphasizes his incapability to adopt to the difficult atmosphere he appreciates the horses for their adaptability to the grey silent world. ?? ?? ?? ?? The Horses - Ted Hughes ...read more.