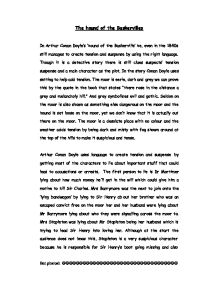 The hound of the Baskervilles

The hound of the Baskervilles In Arthur Conan Doyle's 'hound of the Baskerville' he, even in the 1840s still manages to create tension and suspense by using the right language. Though it is a detective story there is still clues suspects' tension suspense and a main character as the plot. In the story Conan Doyle uses setting to help add tension. The moor is eerie, dark and grey we can prove this by the quote in the book that states "there rose in the distance a grey and melancholy hill." And grey symbolises evil and gothic. Seldon on the moor is also shown as something else dangerous on the moor and the hound is set loose on the moor, yet we don't know that it is actually out there on the moor. ...read more.

Mrs Stapleton was lying about Mr Stapleton being her husband which is trying to lead Sir Henry into loving her. Although at the start the audience does not know this, Stapleton is a very suspicious character because he is responsible for Sir Henry's boot going missing and also following him. Dr Watson is starting to get suspicious over Stapleton because he reacts to them talking to his "sister" and Watson finds that a bit odd. In my third paragraph I will show how the clues and other aspects of the story add to the tension. The letter to Sir Henry that was cut out of a newspaper shows that someone is already watching him. ...read more.