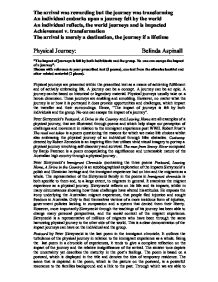 &quot;The impact of journeys is felt by both individuals and the group. No-one can escape the impact of a journey&quot;. Discuss

Walker makes connections to the physical journey through the notion that through the "movement from one place to another" there would be personal growth and actions taken would lead to consequences. It is clear that the journey impacted on the individual and group through the implications evident in the physical journey. "Beneath clouds" presents the journey undertaken by two morally, culturally and racially different teenagers, whose separate journey eventually meet at a crossroad. This film poses and connotes the problem of assimilating or merging distinct boundaries. * The impact of the journey and its implications (crossroads) is far more significant than the arrival, as it is this journey that provides the emotional and intellectual extension. Survival by Stuart Diver is a autobiography telling of the inspirational story of the Thredbo disaster's sole survivor. On the night of July 30th 1997 a landslide shattered the tranquillity of Thredbo village, sweeping away two ski lodges and burying 19 people beneath tonnes of concrete an mud. In the days that followed, the world mourned as rescuers dragged body after body from the rubble. But out of tragedy sprang an amazing story of survival. Stuart Diver, whose wife Sally died beside him in the first moments of the slide, had clung to life buried beneath a concrete slab for 65 freezing hours. Although this seems to portray the very strength and essence of the inner strength and journey, it also emphasises the strength of the physical journey and its impact on the individual (Stuart) and the group (family + world). This story shows how one man found the mental and physical strength to live through tragedy and survive against impossible odds. Stuart's journey relived in this book was cause by an event that transformed and changed his world forever. The journey from the initial fall, to his mind set during those long hours alone beneath the rubble, his painful recovery, his strengthened inspirational attitude to life and the future. ...read more.

He sent the flint stones flying, but the pony kept his feet, He cleared the fallen timber in his stride, And the man from Snowy River never shifted in his seat- It was grand to see that mountain horseman ride. Through the stringy barks and saplings, on the rough and broken ground, Down the hillside at a racing pace he went; And he never drew the bridle till he landed safe and sound, At the bottom of that terrible descent. He was right among the horses as they climbed the further hill, And the watchers on the mountain standing mute, Saw him ply the stockwhip fiercely, he was right among them still, As he raced across the clearing in pursuit. Then they lost him for a moment, where two mountain gullies met In the ranges, but a final glimpse reveals On a dim and distant hillside the wild horses racing yet, With the man from Snowy River at their heels. And he ran them single-handed till their sides were white with foam. He followed like a bloodhound on their track, Till they halted cowed and beaten, then he turned their heads for home, And alone and unassisted brought them back. But his hardy mountain pony he could scarcely raise a trot, He was blood from hip to shoulder from the spur; But his pluck was still undaunted, and his courage fiery hot, For never yet was mountain horse a cur. And down by Kosciusko, where the pine-clad ridges raise Their torn and rugged battlements on high, Where the air is clear as crystal, and the white stars fairly blaze At midnight in the cold and frosty sky, And where around the Overflow the reedbeds sweep and sway To the breezes, and the rolling plains are wide, The man from Snowy River is a household word to-day, And the stockmen tell the story of his ride. Strong links ...read more.