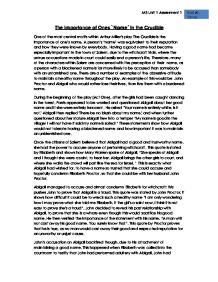 The Importance of One's Name in the Crucible.

The Importance of Ones `Name� in the Crucible One of the most central motifs within Arthur Miller's play The Crucible is the importance of one's name. A person's 'name' was equivalent to their reputation and how they were known by everybody. Having a good name had become especially important in the town of Salem, due to the witchcraft trials, where the untrue accusations made in court could easily end a person's life. Therefore, many of the characters within Salem are concerned with the perception of their name, as a person with a blackened name is far more likely to be accused than somebody with an untarnished one. There are a number of examples of the obsessive attitude to maintain a healthy name throughout the play. An example of this would be John Proctor and Abigail who would rather lose their lives, than live them with a burdened name. During the beginning of the play (Act One), after the girls had been caught dancing in the forest, Parris appeared to be worried and questioned Abigail about her good name and if she were entirely innocent. ...read more.

John decided to reveal his past relationship with Abigail, to prove that she is a whore even though this would sacrifice his good name. He then verified the importance of the statement with his name, "A man will not cast away his good name. You surely know that". This quote by Proctor proves that he is true, as no man would cast away their good and respected reputation for an unworthy or unjust cause. John's accusation on Abigail backfired though, due to his attachment of maintaining a good name. This happened when Elizabeth was called into the courtroom to testify that John had performed adultery with Abigail. John had previously stated that his wife would never tell a lie although he knew that she would to save his good name. Elizabeth then denies knowledge of the affair between Abigail and John and he is arrested as a witch. John's actions to preserve his good name could be considered of a selfish nature. ...read more.

He refused to sign the document and tore it up as if it were his life. Danforth then asked why. John cried "Because it is my name. Because I cannot have another in my life. Because I lie and sign my name to lies! Because I am not worth the dust on the feet of those that hang! How may I live without my name? I have given you my soul; leave me my name!!" The quote above was one of the most important in The Crucible. It shows how reputation was of an extreme and ultimate importance in Salem, where both public and private morality was exactly the same. Earlier in the play Proctor decided to preserve his good name when testifying against Abigail. Although he understood completely in what a good reputation is and that he should tell the truth instead of telling a lie that will save him. It shows how John would rather die as a good person than live as a bad one. ?? ?? ?? ?? ...read more.