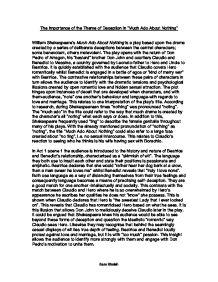 The Importance of the Theme of Deception in &quot;Much Ado About Nothing&quot;

The Importance of the Theme of Deception in "Much Ado About Nothing" William Shakespeare's Much Ado About Nothing is a play based upon the drama created by a series of deliberate deceptions between the central characters; some benevolent, others malevolent. The play opens with the return of Don Pedro of Arragon, his "bastard" brother Don John and courtiers Claudio and Benedict to Messina, a country governed by Leonato-father to Hero and Uncle to Beatrice. It is quickly established with the audience that Claudio covets Hero romantically whilst Benedict is engaged in a battle of egos or "kind of merry war" with Beatrice. The contrastive relationships between these pairs of characters in turn allows the audience to identify with the dramatic tensions and psychological illusions created by open romantic love and hidden sexual attraction. The plot hinges upon instances of deceit that are developed when characters, and with them-audience, "note" one another's behaviour and language-with regards to love and marriage. This relates to one interpretation of the play's title. According to research, during Shakespearean times "nothing" was pronounced "noting". The "much ado" in the title could refer to the way that much drama is created by the character's all "noting" what each says or does. In addition to this, Shakespeare frequently used "ting" to describe the female genitalia throughout many of his plays. ...read more.

double heart for his single one, marry once before he won it of me, with false dice, therefore your Grace may well say I have lost it." Then Beatrice then goes on to explain she puts Benedict down "So I would not he should do me, my Lord lest I should prove the mother of fools" Clearly the banter between them is in fact a self-defence strategy driven by the need to protect pride. Having revealed Beatrice's Achilles heel, Shakespeare is then able to use dramatic irony on two levels. The audience know of Don Pedro's ruse but Beatrice and Benedict do not. Moreover, we know it will work and why. At this point the deception is developed through the language that Don Pedro, Claudio, Leonato and then Hero and Ursula use to convince them to fall in love. In addition to the benign deceptions that take place there are also deceptions developed that have sinister and malicious intentions. The main instigator of these kind of deceptions is Don Pedro's bastard brother Don John -a man who by his own admission is "a plain-dealing villain" Moreover, he refuses to observe the polished social manners practiced by the other characters; he would "rather be a canker in a hedge" than loved by his brother. He is at least honest about his dishonesty which makes him an interesting villain. ...read more.

She is forgiven by Leonato who states she did this "against her will". This would not have been the reaction of the time but may have been left in such way in the play as to ensure the fairytale "...happily ever after" ending wanted by Shakespeare. In conclusion, I believe deception not only plays a vital role within the play but it is the theme upon which the play has been created. The majority of the characters are deceived and it is because of this that they act in the way they do; deceiving either malevolently or benevolently, it is all done for the greater good of the play and results in the fairytale ending that brought people from all over the country to see "Much Ado About Nothing" The deception also brings about strong feelings from the audience by touching on many subjects that contained moral issues they can relate to. Sexism, hierarchy and crime and punishment to name but a few. The sexist content came a long time before feminism was firmly established in society but aroused debate from the audience over the issues the play had noted. This was one of the first major plays to look at the issue of sexism and helped many other playwrights feel more comfortable with writing about issues before seen as "untouchable". ?? ?? ?? ?? Sam Kimish ...read more.