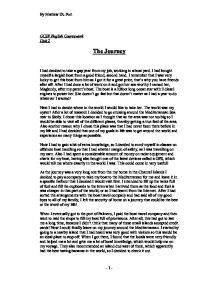 GCSE English Coursework Unit 2 The Journey I had decided to take a gap year from my job, working in a boat yard. I had bought myself a largish boat from a good friend, second hand. I remember that I was very lucky to get this boat from him as I got it for a great price, that's why you have friends after all! After I had done a lot of work on it and got her sea-worthy I named her, Maglendy, after my parent's boat. The boat is a 23foot long ocean star with 2 diesel engines to power her. She doesn't go fast but that doesn't matter as I had a year to do whatever I wanted! Next I had to decide where in the world I would like to take her. The world was my oyster! After a lot of research I decided to go cruising around the Mediterranean Sea near to Sicily. ...read more.

When I eventually got to the port of Palmero, I paid the boat travel company and then went to raid the shops to fill my boat full of provisions. After all, this had got to last me a long time, because I didn't think that many of these small islands accepted credit cards! Now I could finally leave on my journey around the Mediterranean. I started by going to a nearby island that I had heard was very good with visitors so this would be an ideal place to stop off. When I got there, I found that the locals were very friendly and helped me a lot and give me a lot of local knowledge, which would help me on my voyage. They also recommended an island due west of there, which apparently had the best tasting bananas in the world, so I decided to check it out. As this part of my journey was a very long one I set the Autopilot to take me there while I had a lie down in the front cabin. ...read more.

Looking around I saw no trace of human life. Surprisingly I thought that I could see signs of smoke, maybe from a house. I made my boat secure and I got in my dingy and started to motor ashore. As I was heading to the beach I saw someone in the trees at the top of the beach, I shouted but they obviously didn't hear me because of the noise of the motor. When I got to the beach I went to the trees to find some footprints. I follow them into the trees. I saw them again but as the trees were so dense, I lost sight of them, but kept on going in the general direction of them. I stayed on the same course and eventually came to a clearing in the trees. There was a house with smoke coming out of the chimney, but there was no one to be seen. I look in the house, it was barren and looked like someone has been "roughing" it there. I then suddenly heard a gun shot and fell to the floor......... By Mathew Du Port - 1 - ...read more.