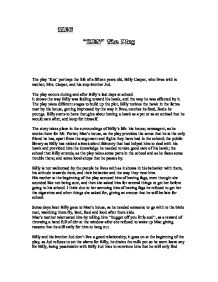 11EG "KES" The Play The play 'Kes' portrays the life of a fifteen years old, Billy Casper, who lives with is mother, Mrs. Casper, and his step-brother Jud. The play occurs during and after Billy's last days at school. It shows the way Billy was feeling toward his hawk, and the way he was affected by it. The play takes different stages to build up the plot, Billy notices the hawk in the farms near by his house, getting impressed by the way it lives, catches its food, feeds its youngs. Billy starts to have thoughts about having a hawk as a pet or as an animal that he would care after, and keep for himself. The story takes place in the surroundings of Billy's life: his house; newsagent, as he works there for Mr. ...read more.

I think due to her accusing him of having fags he refused to get her the cigarettes and other things she asked for, giving an excuse that he will be late for school. Some days later Billy goes to Mac's house, as he needed someone to go with to the birds nest, watching them fly, land, feed and look after there kids. Mac's mother mistreated him by telling him ''bugger off you little sod'', as a reward of throwing a hand full of dirt at the window after she refused to wake up Mac giving reasons that its still early for him to hang out. Billy and his brother Jud don't live a good relationship, it goes on at the beginning of the play, as Jud refuses to set the alarm for Billy, he drains the milk pot so he wont leave any for Billy, being pessimistic with Billy Jud ...read more.

Mr. Porter was quite worried that Billy might not be able to deliver all his papers at time, as his brother Jud have taken his bike, and that might cause him some loss in his shop's profit if Billy delivers the papers later than he is supposed. I learn that these people treat him generally in the same way, but with a difference from one to the other. I think Billy likes to have conversations with people even though he don't know them, as when he was delivering his papers in the early morning, after leaving Mr. Porter's newsagent, and saw the milkman who started an conversation with Billy about having something to deliver his papers with even if it's a ''Third class riding which is better than first class walking, as the milkman thinks, but according to Billy that is no good as he says that it do no more than five miles per hour, and that he can do faster on a kids scooter. ...read more.