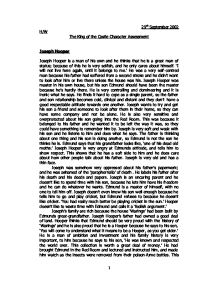 The King of the Castle Character Assessment Joseph Hooper.

29th September 2002 H/W The King of the Castle Character Assessment Joseph Hooper Joseph Hooper is a man of his own and he thinks that he is a great man of status; because of this he is very selfish, and he only cares about himself. 'I will not live here again, until it belongs to me.' He was a very self-centred man because his father had suffered from a second stroke and he didn't want to look after him or live there unless the house was his. Joseph Hooper was master in his own house, but his son Edmund should have been the master because he's hardly there. He is very controlling and domineering and it is ironic what he says. He finds it hard to cope as a single parent, so the father and son relationship becomes cold, clinical and distant and they don't have a good respectable attitude towards one another. Joseph wants to try and get his son a friend and someone to look after them in their home, so they can have some company and not be alone. He is also very sensitive and overprotected about his son going into the Red Room. This was because it belonged to his father and he wanted it to be left the way it was, so they could have something to remember him by. Joseph is very soft and weak with his son and he listens to him and does what he says. The father is thinking about one thing and his son is doing another, so Edmund is not the son he thinks he is. Edmund says that his grandfather looks like, 'one of his dead old moths.' Joseph Hooper is very angry at Edmunds attitude, and tells him to show respect. This shows that he has a soft side to him and he does care about how other people talk about his father. ...read more.

His father was a bald, cadaverous man with a mole on his chin. He told Edmund that he was in the Battle of Britain when he was twenty in the war. Charles thought that he had won, but he did not feel the winner; this was odd and it proved that he was a rather strange child. He thought that Edmund had conceded him nothing. Charles thought that it was wrong for him to start unpacking straight away, because it would seem like it was final and as though they had accepted the fact that they were going to stay there, as though there were a future to be considered. Charles confronted Edmund clearly and said, 'You needn't think I wanted to come, anyway.' Edmund was a very short-tempered, ill-mannered boy because Charles just said to him, 'You'd better shut the window, it's my window now,' and Edmund thought that it was the 'new note' in his voice and 'hearing the tremor of anxiety,' Edmund raised his fists and punched him on his nose. The punch was 'brief, wordless and violent.' Kingshaw wiped his bloody nose and then looked at the handkerchief, his heart was thumping because he had never fought another boy like that before. He was starting to think how the future would be like now. It is clear now, that Charles doesn't like Edmund because he wished that he would leave him alone and go, as he was standing beside the window. Kingshaw is a very agitated character, because he keeps repeating the fact that, 'You needn't think I wanted to come here, you needn't think I like it.' Kingshaw thought that there was some kind of 'truce' between Edmund and Kingshaw, as he had come prepared to get on with Hooper like he got on with most people. Susan Hill tells us that Charles thought that it was safer to get on with people because he was a vulnerable, innocent character to let himself indulge in the making of enemies. ...read more.

He thinks that Kingshaw should obey him, because it's his house and they are like a lower class because they have moved from place to place, and they have never had a stable family or home. He is also like the leader, and he wants Kingshaw to bow down to him. He is also a liar because he has a mocking face while saying, 'Don't I always do what my father says?' He is proud of himself and starts to chant. 'You were told to follow me.' I think that in a way Edmund envies Kingshaw because he has a mum and that's why he teased him. 'Did if frighten Mummy's baby boy?' He threatens Hooper and tells him to 'watch it,' because he's turning into a 'rude boy' and 'cocky.' He also dares him to see if he will obey him or not. He was suspicious about Kingshaw; he wanted to know what was going on inside his head. He likes to frighten Kingshaw, and as soon as he gets ideas in his head, he is filled with excitement. He is not used to been a bully, 'he was trying it out,' just 'learning.' He had bullies at school, but he wasn't like them. I think that this had an influence on Edmund and that's why he wants to bully Kingshaw to take all his isolation out on not having a mother or nobody to talk to; he feels locked up inside. I think that he was also bullied at school, because Susan Hill tells us that, 'he couldn't cope with them.' He was been bullied so he wanted to see how it was like himself to be a bully. This wasn't a very pleasant thing to do, because he knew himself how it felt to be a victim but he still carried on. The bullies had 'simple, and transparent minds.' He acted 'cool' and he said that the bullies didn't bother him, because he had ways of 'dealing' with them. Hooper was a 'clever, unpredictable and inventive' character. 1 ...read more.