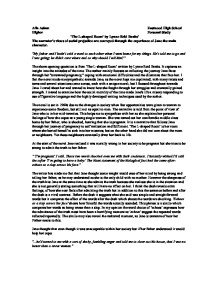 'The L-shaped Room' by Lynne Reid Banks'The narrator's views of social prejudice are conveyed through the experience of Jane the main character.

Afia Aslam Eastwood High School Higher Personal Study 'The L-shaped Room' by Lynne Reid Banks' The narrator's views of social prejudice are conveyed through the experience of Jane the main character. "My father and I hadn't said a word to each other when I went home for my things. He's told me to go and I was going; he didn't care where and so why should I tell him?" The above opening quotation is from 'The L-shaped Room' written by Lynne Reid Banks. It captures an insight into the attitudes of the time. The author mainly focuses on reflecting the journey Jane faces through her "unwanted pregnancy," coping with emotional difficulties and the dilemmas that face her. I feel the novel made me sympathetic towards Jane, as the novel kept me captivated; with many twists and turns and several situations came across, each with a unique moral; but I focused throughout towards Jane. I cared about her and wanted to know how she fought through her struggles and eventually gained strength. I intend to examine how the social morality of the time made Jane's life a misery responding to use of figurative language and the highly developed writing techniques used by the author. The novel is set in 1960s due to the changes in society when few opportunities were given to woman to experience some freedom, but still not as equal to men. The narrative is told from the point of view of Jane who is in her mid-twenties. This helps me to sympathise with her as she explains her personal feelings of how she copes as a young single woman. She was turned out her comfortable middle class home by her father, who is shocked, hearing that she is pregnant. It is a narrative that follows Jane through her journey of pregnancy to self realisation and fulfilment. 'The L-shaped Room' is her room where she buried herself to sink into her miseries; but on the other hand she did not care about the room or neighbours. ...read more.

The society has a major input to Jane as it makes her opportunities worse of what she decides to do with the baby: "I could sometimes forget it almost completely. So long as nobody knew about the baby, it didn't seem, even to me, quite real." This shows due to the constraints from the society she doesn't seem to bother about they baby she is just letting time pass and acting normal so no one would find out. I feel the more she thinks about the baby it panics her so she tries to avoid it but fears of anyone finding out. However this shows the other side when she lies at nights thinking alone: "My bogies were chiefly questions. How am I going to keep it? Should I keep it at all- wouldn't it be better to have it adopted? What will it think of me when it's old enough to realise it hasn't a father? Or immediately ones like: How am I going to tell people like Toby and James? What shall I do? How will it feel to be the only woman in the maternity ward whose husband never comes to see her? And over and over again: Why did this have to happen?" The writer made me feel and realise Jane's misery through several techniques like colloquial language used as Jane spoke as if she was thinking aloud. The sentences are short and simple which is dramatic as it shows the desperation of wanting freedom from the sin she has committed. I think it shows Jane now takes it serious and realises her biggest mistake made which will ruin her own and the baby's life. The author uses a series of rhetorical questions which shows the endless list of thoughts running through Jane's mind and gives a vivid image of what constraints are on Jane now as it involves me to think and performs a close relationship with Jane as I sense her now panicking and really frustrated. ...read more.

Toby explains how love is another side to it but it shows how a baby makes the situation far more worse but his words are strong as the rhetorical question are aimed at Jane to show if he had done this it would not easily be accepted. The rhetorical question in my opinion gives the image that Toby is stuck he does not whether to go with love or what is socially right. I think Toby is inconsiderate as a baby can come from a single night and it could have happened like that between them both in their relationship. However Jane understands how she is bringing misery upon both their lives but her love for Toby has reflected how she suffers for her actions and tried to end the baby's life however through Toby appreciates love and changes her viewpoint to make the world a better life and she has no right to end the life of the baby. In the novel a strict moral code has been established throughout. In my opinion a strict moral code could makes society "better" and "worse." In a strict moral code parents are more demanding and expect alot from their children which takes away freedom and some rights to an extent. However it may lead to increased happiness as no one will go out of turn or do an outrageous act due to the society's influence. On the other hand a strict moral code would not account for individual's special needs or feelings because they would not be dealt with and ignored as the social code would be enforced. I think 'The L-Shaped Room' is a clearly well structured novel which is true to life as in some society's or countries individuals have no rights. The novel provokes a message across that this is a preparation for real life, as this could happen if you go astray and don't think about the consequences. In my viewpoint Jane as a character can be admired for her strength that she gains. ...read more.